Therapy Cats Offer Love And Support To Seniors in Nursing Homes. This Heartwarming Story Is Proof. 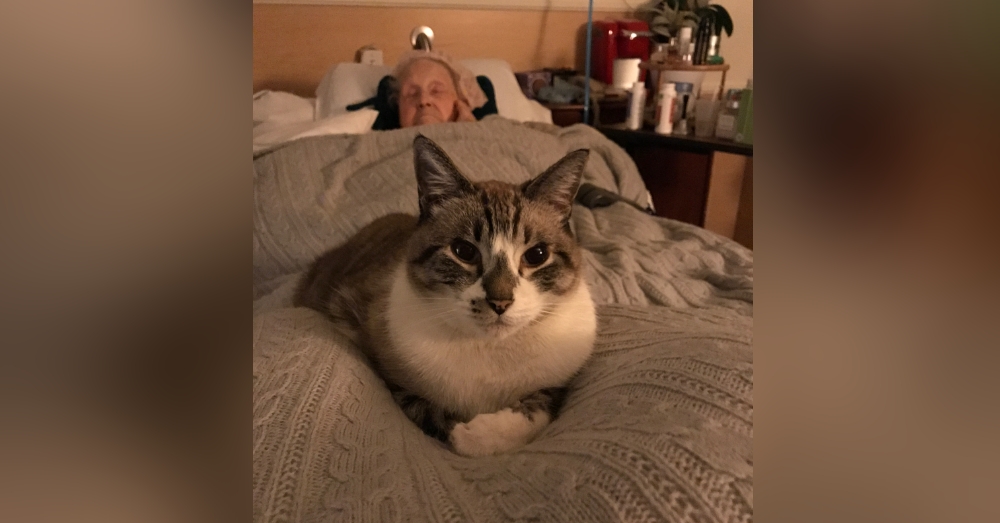 Three years ago, the Animal Rescue Site was lucky enough to visit Bayview and meet with some of those incredible cats and residents. One woman, Evelyn Kirking, described her powerful bond with Frankie Blue Eyes, a therapy cat so attuned to the elderly woman’s needs that he could sense when she needed some extra love and cuddles. (A second therapy cat, Mr. Pickles, recently passed away).

“Frankie and his blue eyes are a great comfort to me, and I know to many others,” Evelyn explains in the short documentary below. After this video was produced in 2015, Frankie and Evelyn only grew closer, according to her granddaughters, Katie and Annie Kirking, who reached out to share how the cat helped comfort their grandmother in her final days. 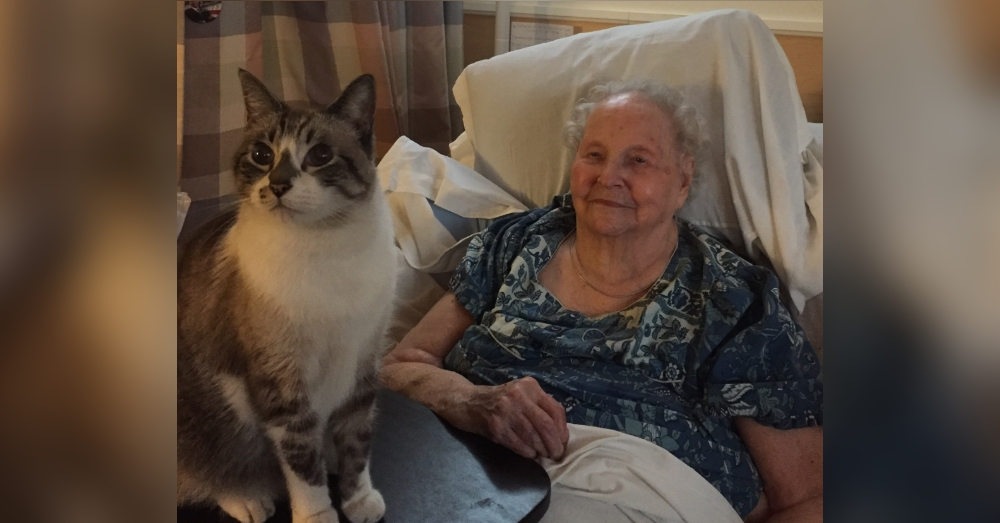 “Frankie was pivotal in helping our Grandma feel more at home at Bayview,” they explained in an email to The Animal Rescue Site.

“Our top priority was being with our Grandma as much as possible, but we could not be there 24/7. Frankie was there with her providing love and companionship which comforted our grandma and eased our minds as well,” they wrote, recalling how Frankie, who spent most of his time at Evelyn’s side, even followed when their grandmother changed rooms. 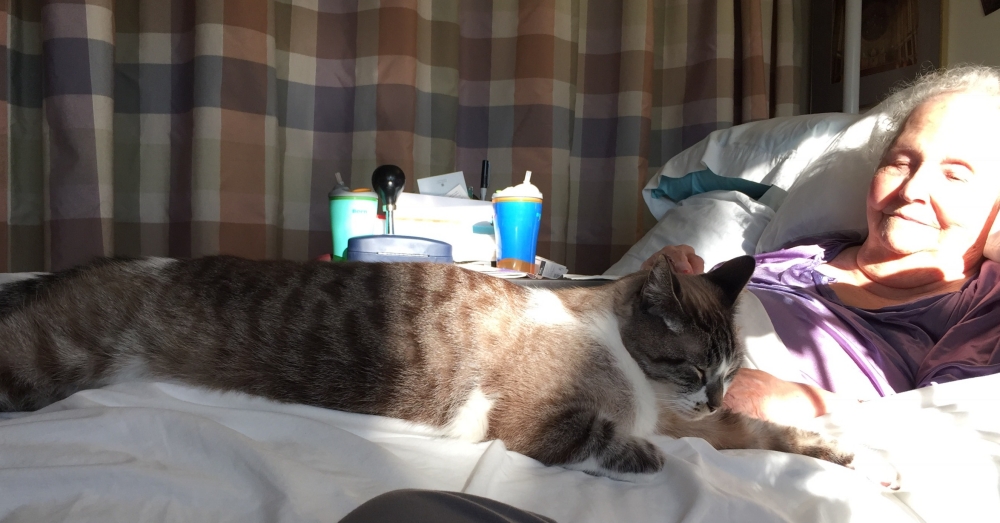 Evelyn’s health, unfortunately, began to decline in October 2018, when she suddenly developed sepsis. The elderly woman was rushed to the emergency room, where doctors warned she wouldn’t survive the night. But somehow — despite all the odds — the nonagenarian managed to pull through.

“She had other plans and getting back to Frankie was part of that plan,” Katie and Annie recalled, remembering how their grandmother miraculously withstood the worst of an antibiotic resistant infection, while her blood pressure suddenly stabilized. 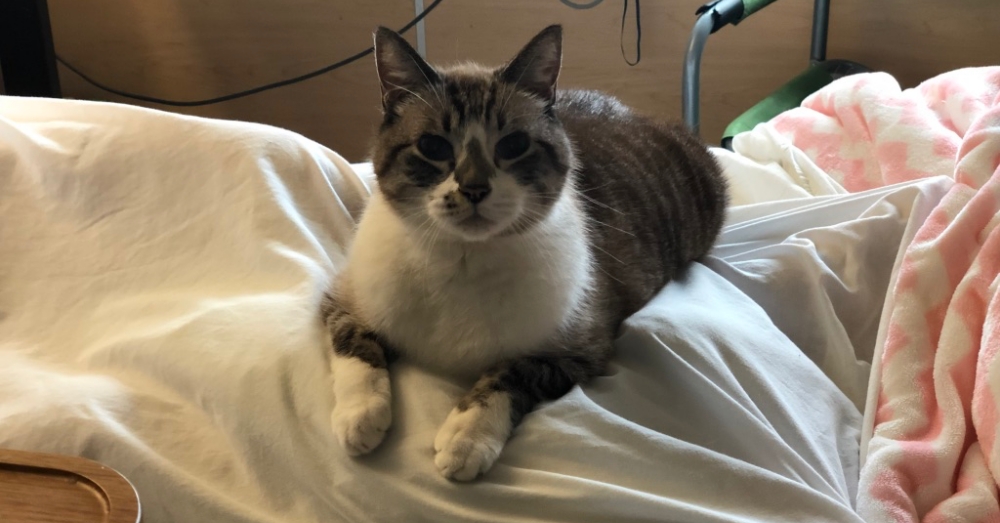 Frankie, meanwhile, had been desperately worried while Evelyn was away. “We were able to take her back to Bayview and to her Frankie,” her granddaughters recalled. “Frankie had been unwilling to move from her empty bed while she was in the hospital, and the reunion between them was beautiful.” 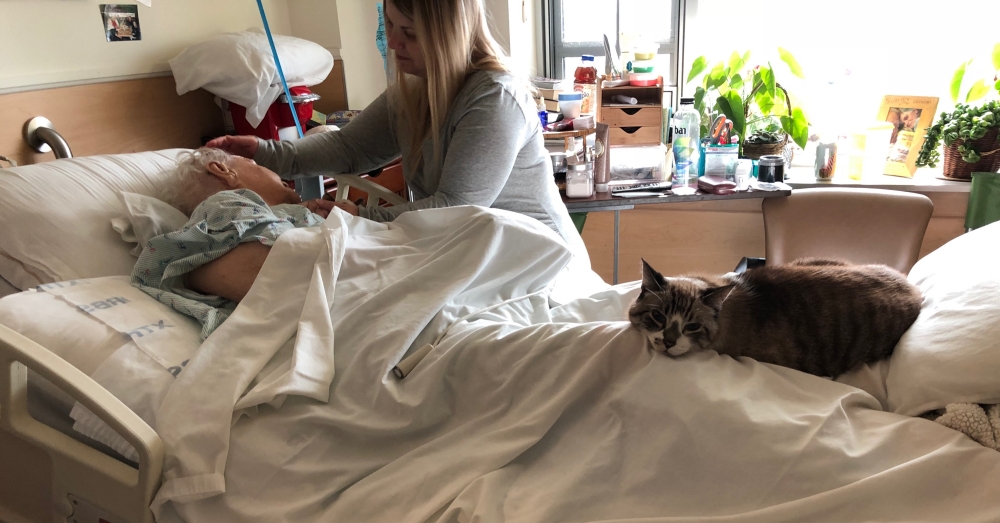 Evelyn Kirking would live for another three weeks before finally succumbing, at age 98, to the infection’s lasting impact on her heart. “Frankie never left her side–in fact, they moved his food into her room so he would eat,” her granddaughters recalled, recalling how their beloved matriarch spent her final moments surrounded by family — and one loving, intuitive cat.

“I woke up on more than one occasion in a sleeping chair next to my Grandma’s bed to find that Frankie had curled up in my lap in the middle of the night–always with an eye on my Grandma and a paw on her bed,” Katie remembers. “He crawled in our Dad’s lap one night, something he had never done before, seemingly recognizing how badly our Dad needed him at that moment.” 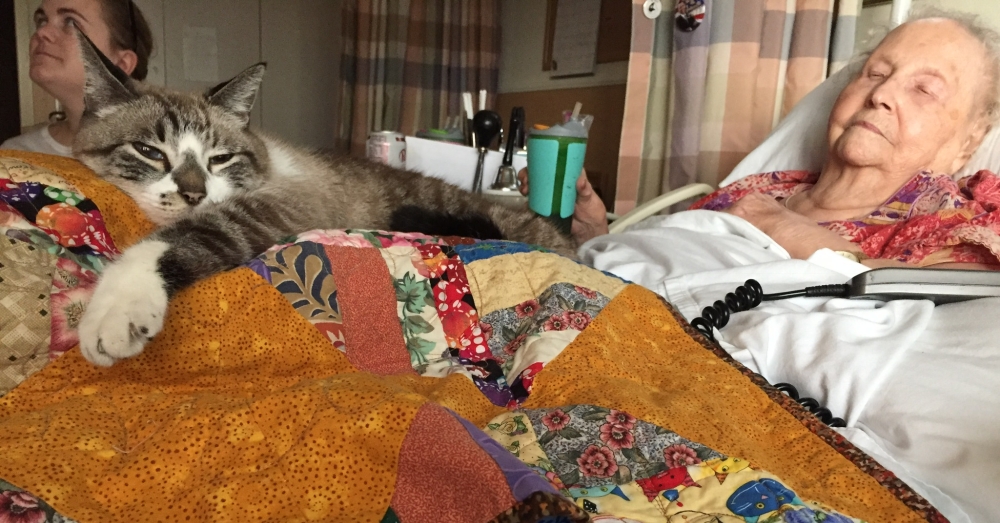 Katie, Annie, their parents, and Frankie were all with Evelyn when she peacefully passed away on November 14, 2018. “Frankie stayed on her bed, curled up against her the entire time,” her granddaughters recalled.

Even afterwards, the grieving feline refused to leave Evelyn’s side, so much so that Frankie had to be moved once mortuary workers arrived. “He didn’t go far,” Katie and Annie said, recalling how Frankie followed them into the hallway, then rushed back to Evelyn’s empty bed, clearly distressed to find it empty. 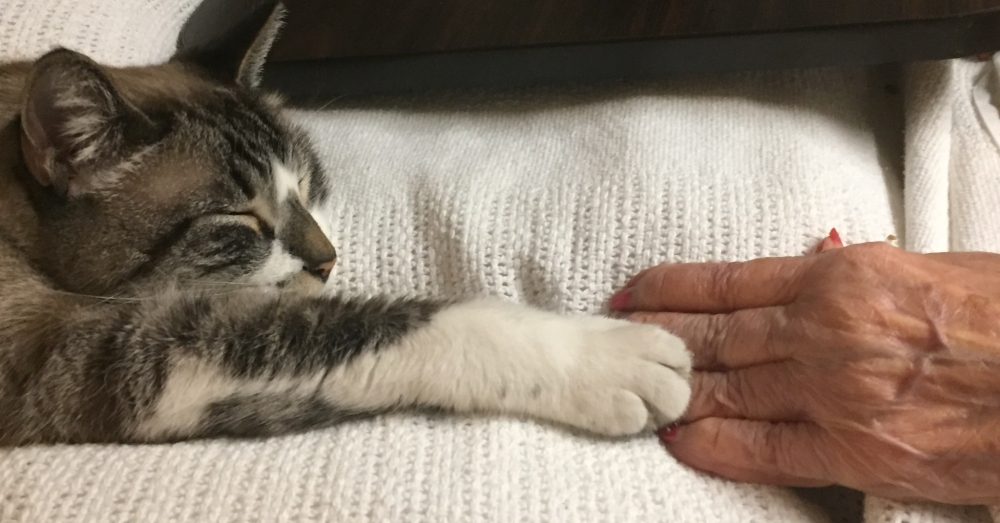 Over the next two-and-a-half days, Frankie hung around while Katie and Annie packed up their grandmother’s things, often moving them both to tears when he climbed up onto Evelyn’s empty bed meowing.

“I’m not sure how my sister and I would have gotten through the process of packing everything up without Frankie,” Katie explains. “In many ways he was a physical manifestation of the grief we were feeling, and we needed each other.” 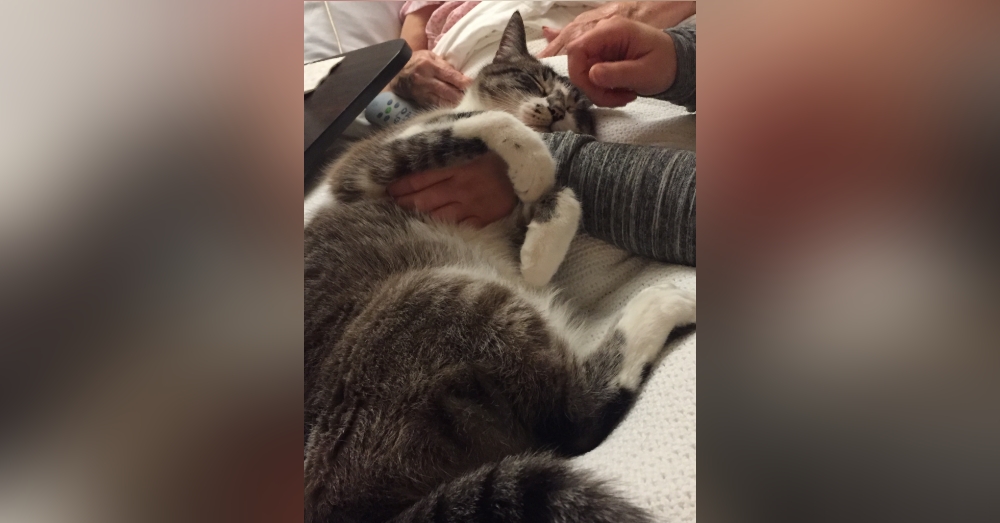 The women visited Bayview several times over the following weeks. On each occasion, Frankie appeared out of nowhere and tried to lead the women back to their grandmother’s old room.

On other days, he simply posted himself outside Evelyn’s bedroom door. “Everyone was concerned with the palpable grief he was displaying,” the younger Kirkings recalled. “We were actually prepared to adopt him if he didn’t start bonding with other residents and families.” 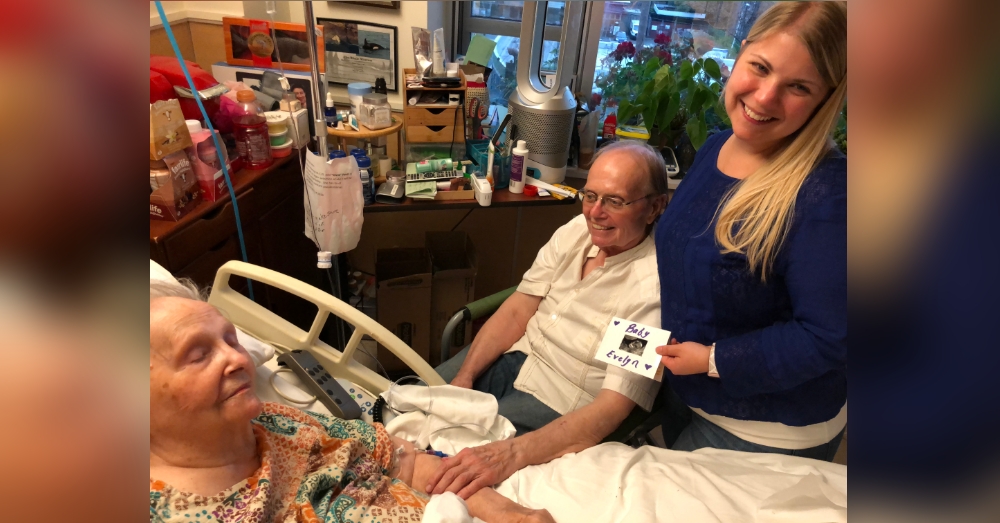 On a recent trip, Annie brought in her newborn daughter — named Evelyn for her great-grandmother — to meet Bayview’s staff, who had also become like family. The pair had grown especially close with Lynn Arntuffus, Bayview’s Director of Activities, who facilitated the therapy cats program that brought their grandmother so much joy.

The young women were relieved to hear Frankie had finally started bonding with other residents, even though the cat reportedly still posted himself outside Evelyn’s old room on occasion. “Those residents may not know it yet, but they have one amazing cat looking out for them,” the younger Kirkings agreed. 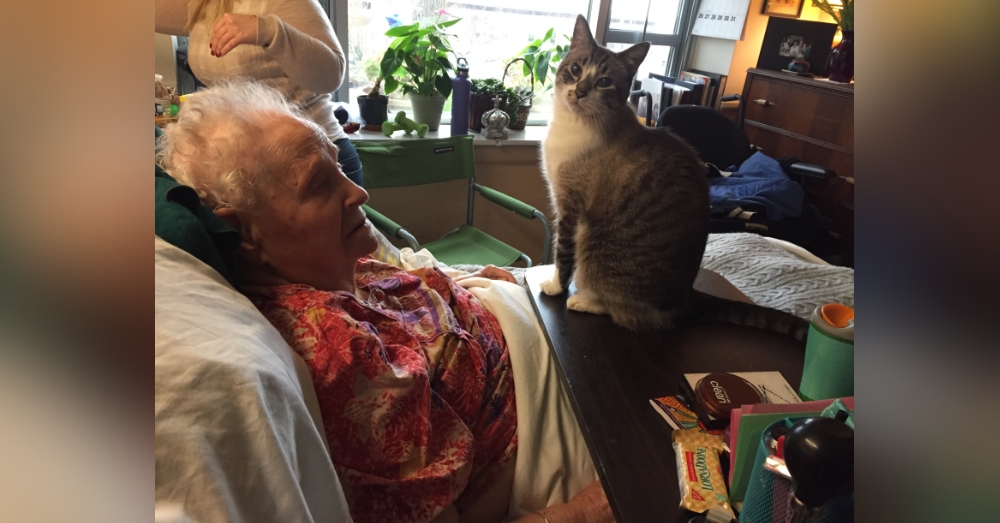 “The love and devotion between our Grandma and Frankie may have come as a surprise to some, but not to us,” Katie and Annie wrote, describing their grandmother’s deep bond with her departed cat, Laddie, who moved in with Annie when Evelyn relocated to Bayview, which doesn’t allow personal pets.

Though he was allowed to visit and attend family functions, Laddie sadly died in his sleep shortly before Frankie Blue Eyes’ arrival. Although entirely coincidental, the therapy cat’s impeccable timing also helped Evelyn process her grief. (Laddie’s ashes have been buried with Evelyn, per the lifelong animal lover’s request). 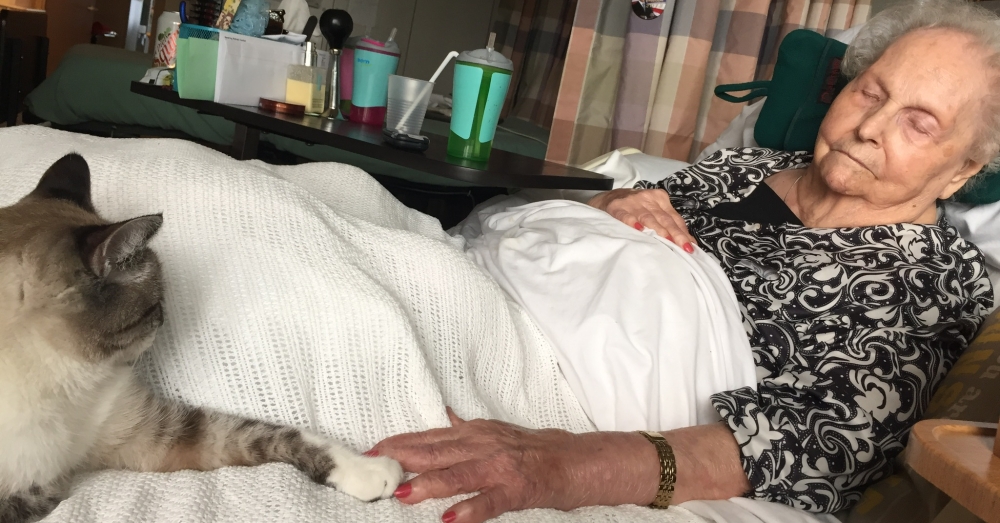 “She may have initially coaxed Frankie to her room with treats as shown in the Frankie Blue Eyes video, but they quickly became the best of friends,” Katie and Annie recalled.

“And while Frankie wouldn’t turn down a treat, theirs was a relationship based on great love for one another,” they wrote, describing their grandmother as “the light of our lives, the anchor of our family, and unquestionably the best person we’ve had the privilege of knowing.”

Watch Evelyn and Frankie Blue Eyes’ incredible bond in the short documentary below!