For aging pet owners, the future can be a source of anxiety. “What happens to my pet if I need to go to a home?” they may wonder. Traditionally, many home communities have not allowed pets. However, as time goes on, the amazing impact animals have on the elderly becomes more clear. This change in attitude stems from cats like Mr. Pickles. His unconventional actions have made a monumental difference for many at a retirement home in the Pacific Northwest.

Mr. Pickles is a tabby cat who one day ventured into the property of Bayview Retirement Community in Seattle, Washington. Out of warm-heartedness, residents tossed him bits of food. Maybe that’s why he returned. Maybe it was the looks of elation of the faces of every resident, along with their excitement at being able to pet him. Maybe Mr. Pickles just needed some company and wanted to come visit some new people. Regardless of his reasons, Mr. Pickles walked in a confident as a cat can be!

Mr. Pickles wasn’t a stray or lost cat. It turns out he had an family of his own. When his owner found out where Mr. Pickles’ excursions were taking him, he came to Bayview with an offer. The friendly felines father was moving, and due to medical issues keeping him away from home more often than not, he offered to let Mr. Pickles stay with them, to which they happily agreed. 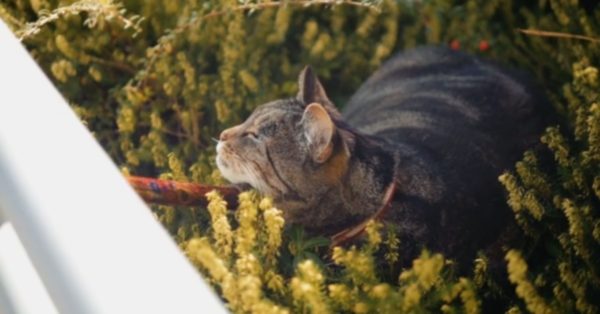 The feline has been a furry resident ever since. He spends his days sleeping beside a resident, keeping residents company, and allowing residents to scratch his chin with their canes. His patience and understanding has been an intense balm to many of the residents. Even those residents that decline to interact with even the staff have found joy in Mr. Pickles.

Watch this video to learn more about Mr. Pickles, his stunning intelligence, his charm, and his role in the retirement community.

Mr. Pickles isn’t the only incredible feline that is helping residents of a retirement home. Another incredible cat is making a major difference in the lives of his adopted residents. Meet Frankie Blue Eyes!