Lost On A Mountain During The Worst Winter Storm Of The Year, Yogi Didn’t Have Much Of A Chance!

Imagine spending New Year’s terrified and worried about your dog fending for himself in one of the worst snow storms of the year. That’s exactly how the Gaudio family of North Bend, Washington, spent theirs after their 6-year-old boxer Yogi was lost while hiking in the mountains.

The family took to Mailbox Peak near Snoqualmie for their final hike of 2016. The typically well-behaved Yogi was enjoying some off-leash time (a common occurrence on every hike they take) when something caught his eye and he sprinted away.

“If we’re out walking, we like to let him run back and forth between the two of us,” mom Cindy Gaudio told Snoqualmie Valley Record. “Typically he’s right there beside us.” 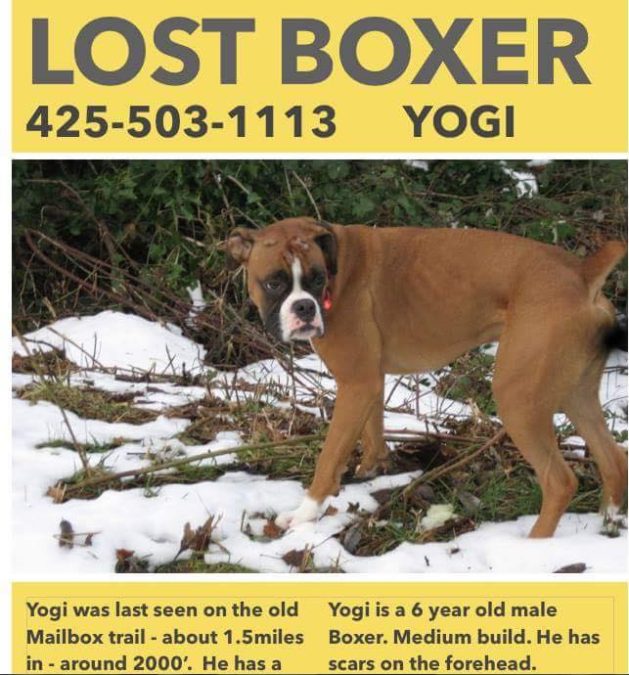 The poster that flooded social media after Yogi’s disappearance

When his absence was noticed, the group split into teams; one group backtracked, and the other continued climbing and looking for Yogi. They stayed on the trail until 8:00 p.m., making sure to talk to every group starting their trek and those ending it, trying to find some hint of Yogi’s location.

“My husband spent the night out there, in case he came home, or came back down,” Gaudio said.

The Gaudios spent the following three days frantically searching for Yogi, passing out “lost dog” flyers, spreading the word via social media, putting up notices on Craigslist, and even contacting the DNR in hopes of finding help. They exhausted every trick in the book to no avail.

After four days of waiting, the Gaudios received a call from the North Bend Fire Training Academy. After three days of surviving below zero temperatures (and as a short-hair!), dodging cougars, and countless other dangers, Yogi approached the academy, scared, but looking for help. A few of the male firefighters tried to coax him in, but it wasn’t until one of the female staffers approached Yogi that he finally let them help him.

Cindy’s reaction to the phone call is very understandable after such a long ordeal!

“He couldn’t even dial the number correctly,” Gaudio said. “It took him four tries to do it… then he went out there, and sure enough, they had our dog.”

Yogi ended up losing a few pounds, but outside of a few scratches and a torn pad, he was perfectly fine, and frostbite-free! This story thankfully has a happy ending, and is a great way for the Gaudios to start the new year!

Sadly, not every lost dog story ends well. It is essential that all dog owners do everything they can to reduce the risk of losing their dogs. And if you find a lost dog, there are many ways you can help make sure it returns home safe!