Animals have a way of teaching us many life lessons. They know how to live in the moment and love unconditionally. One tiny kitten refused to give up, even when the odds were against him.

Jasper was born on a farm. At six-weeks-old he was found by a good samaritan who brought him to Saving Grace Rescue for a better life. The tuxedo kitten could not stand up on his own. The San Francisco based rescue had the kitten examined and found that he had Cerebellar Hypoplasia. This condition is not painful, but influences coordination. The part of the brain that controls coordination is underdeveloped.


Amber Rose, founder of the rescue, told Love Meow, “He is a very happy, energetic, outgoing and people oriented kitty.” Even though he was unable to move like other kittens, he still just wanted to play and cuddle.

Josh Norem, also The Furrtographer, volunteered to foster Jasper. He told Love Meow, “When I first got him he couldn’t even stand up at all. I had to put him in the litter box, and he’d lay on his side to go to the bathroom, but he never gave up.” 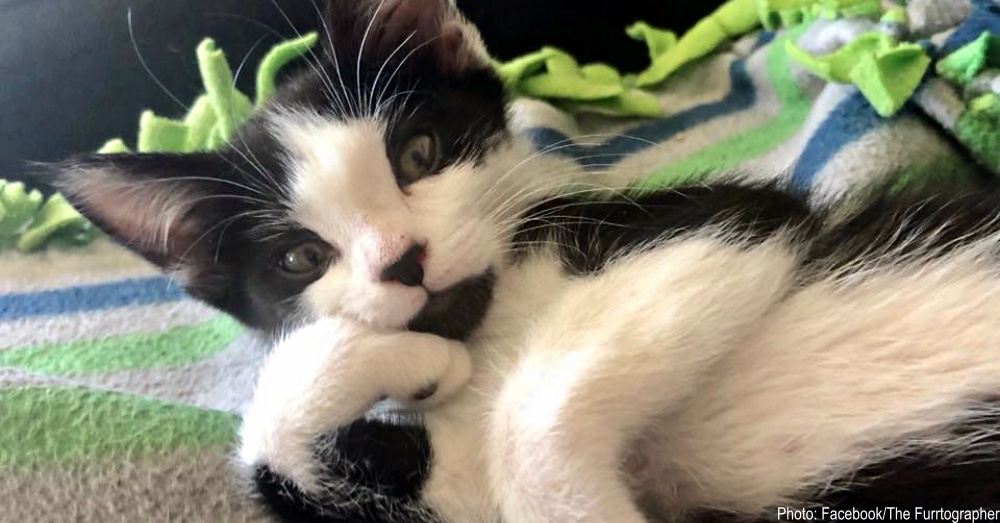 Jasper took it upon himself to learn to walk, and within a week he was able to get in and out of his litter box on his own. However, this was not enough for the determined kitten. Each day he would increase his speed and straightness. If he fell, he would pick himself up and try again.

His foster dad encouraged and praised him for all his efforts. Once Jasper mastered walking straight, he learned to pounce and run. The tiny kitten refused to give up.

“Over time he just figured out how his body works and compensated for it, even though I’ve never seen anything like it.” Jasper was adopted into a home with three other cats to run and play with.

According to Rose, “The condition is not degenerative, and they will only improve as they learn to move.” Throughout the entire learning process, Jasper was a happy and energetic kitten that was determined to succeed. He is an amazing example to all.

Watch his impressive progress in one month in the video below.