UPS deliveryman Doniel Kidd was delivering packages in Athens, Louisiana, when he stopped at a home on his route in which he was very familiar with. He often made deliveries to this house and became friendly with the three dogs who lived there.

This time when he stopped, homeowner Staci Burns caught Kidd on camera kneeling down in the driveway to take a selfie with her dogs. The three pups crowded around him for the picture, licking his face and wagging their tails. Reba, the red Australian Sheppard, practically curled up on Kidd’s lap. It’s obvious from the video that these dogs recognized Kidd and love him very much!

Burns believes that Reba, especially, has taken a liking to Kidd because she ran away and got lost once, and Kidd found her and brought her back home in his UPS van.

She posted the video on Facebook with the caption: “When you have the best UPS man on the planet.” The video has since gone viral, receiving over a million views and more than 14,000 shares.

These pups aren’t the only ones on his route that Kidd visits. He is definitely a dog whisperer and loves all dogs. He’s been seen sitting on the steps of his UPS van, feeding other dogs along his route. I’m sure all of the dogs go crazy as soon as they see his UPS van coming down the street. 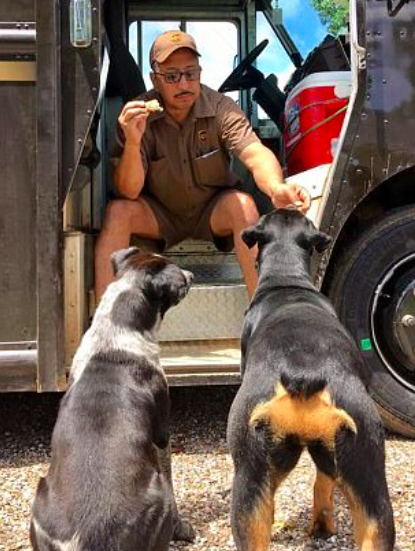 Watch Kidd take a selfie with the three pups in the video below. It’s so heartwarming to see and definitely restores my faith in humanity!