It’s been just over nine months since Russia invaded Ukraine, and Ukrainians that have remained in their country have faced many hardships, from a lack of critical services to food insecurity. Among the critical services many have lost is electricity. With the winter months looming, the lack of power will make things even more difficult, but your donations helped fund a recent delivery that will help.

In mid-November, Greater Good Charities distributed 6,000 blankets in south central Ukraine, to communities that were either recently occupied or along the front lines. The blankets residents received were made in Ukraine with local materials, in an effort to contribute to the country’s economy. Among the towns and villages helped were Zelenodolsk, Zahradivka, Orlove, Natalyne, NovoBratske, and Kochubeivka, whose residents have been impacted heavily by the war.

This effort was made possible, in part, by your donations, shopping for a cause, and clicks.

John Peaveler, Vice President of Field Operations at Greater Good Charities, says, “I want to say a huge thank you to GreaterGood.com for their incredible support of all of our ongoing work in Ukraine. They’ve been with us from the beginning, providing a tremendous amount of pet food through The Animal Rescue Site. Right now… they’ve sponsored us for 6,000 blankets… They’re warm, they’re insulating, and they’re going to help these people get through this winter.”

To help communities through these cold months, the team also recently delivered 2,000 winter relief kits. The kits contained hygiene items and ingredients to make nearly 80 meals. The animals facing a tough winter were also kept in mind, with dog and cat food delivered to pet owners, as well as those feeding strays. Peaveler says it’s important to the organization to take these small steps to help people who have been through so much, but are still doing what they can to help each other.

He explains, “In Kochubeivka, we met with a town administrator, something like a town clerk in the U.S., and asked her to tell us about her experiences in the last few months. With tears in her eyes, she told us of the occupation, shelling and looting by Russian soldiers. She showed us photos of the ransacked government offices and showed us the town safe that had been shot to pieces. Hers is a deep and lasting trauma, like so many millions of others across Ukraine. I found it too painful to keep asking her questions. Despite her pain, she continues to help the people of her small enclave of 10 villages, and we were glad to be able to contribute to the health and stability of many people in the region through our winter relief kits.”

He adds that his team was reminded of the reality of the war when they began heading back to Poland. Parts of the country were under missile strike, and they had to take shelter. However, he says with the support of caring people like yourselves, Greater Good Charities has been able to lend a hand to this war-torn nation, and not just with this recent trip.

Since the war began, Greater Good Charities has worked to help animal lovers care for both their own pets and those that were left behind by others fleeing to safety. To accomplish this, GGC has worked with national pet food industry leaders to provide financial support, EU-certified pet food, and medicine. The team has also worked to deploy licensed veterinarians and supplies to animal welfare organizations and pet owners in need. Your contributions continue to help fund these efforts to feed animals suffering from the effects of the war.

GGC is continuing to distribute food supplies for people, as well, meeting with local humanitarian partners to assess needs and the current environment in Ukraine. Their work has benefitted food banks, animal shelters, a border crossing, and a refugee center.

So far, your clicks, donations, and purchases have helped raise over $1.4 million for all of these causes, and this Giving Tuesday, you can help provide even more aid for the months ahead. There are a variety of ways you can help, from pet food drive donations to distributing more blankets. You can also ensure more people receive needed winter relief kits. Find out what you can do below.

Help Ukrainians Get Through the Winter 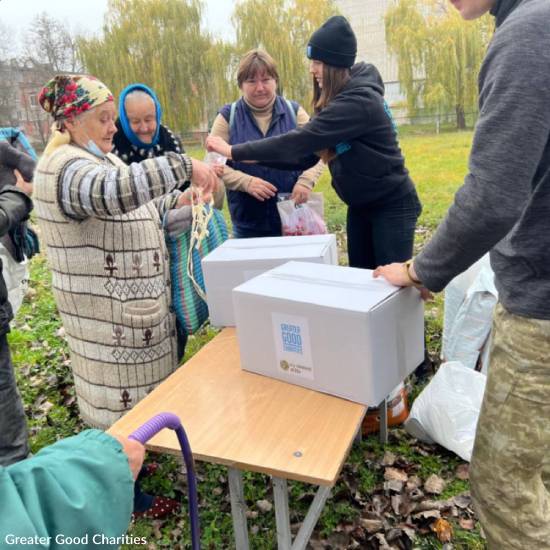 The war in Ukraine has left many without important resources, particularly in areas near the front lines or that were recently occupied.

As winter comes, damaged infrastructure means that many Ukrainians lack electricity. Many also lack enough food to get through these cold months.