Another majestic and beloved lion was killed for “fun” by an American trophy hunter.

Six years ago, the beloved Cecil was shot and killed by a U.S. trophy hunter outside the Hwange National Park in Zimbabwe. Even after all the outrage over his death, the tragedy has occurred again.

The 12-year-old male lion was known as Mopane and dominant over two prides. He roamed the Hwange National Park and would sometimes cross its borders.

On August 5, 2021, he entered an unfenced hunting concession called Antoinette that borders the park. He was lured out by the dead carcass, which was used as bait.

He was allegedly shot with an arrow by an American trophy hunter, but the arrow did not immediately kill him.

Africa Geographic, a private travel and conservation club, said, “He apparently spent the next 24 hours wounded, after which time he was finally killed. We do not know if his misery was ended by another arrow or by a bullet.”

Sadly, he was not the first (nor will he be the last) lion to die this way.

“Over the last 12 years, hunters have killed more than 20 named lions in the region,” reports Africa Geographic.

This includes the beloved Cecil, Xander, Judah and countless more.

Mopane leaves behind two lionesses and six offspring known as the Somadada pride. His other pride also consisted of two lionesses but the two cubs were “likely sired by the Chiz Boys”, but he adopted them as his own. Without Mopane to protect them, they are all at risk.

Kitty Block, CEO of The Humane Society of the United States, said, “Mopane was a father and played a significant role in his pride. Without him, his pride is now vulnerable to takeover by another male or group of males, which may lead to the killing of the cubs and females in his pride.”

While it is heartbreaking to lose such a prominent breeding lion, the hunt was legal. People pushed for Zimbabwe to ban trophy hunting after Cecil’s death, but nothing has changed.

Africa’s lion population is quickly declining. Lions are extinct in 26 African countries and there are only 20,000 left in the wild.

Born Free Foundation said they, “ethically opposed the killing of animals for sport or pleasure. We also challenge the claims made by proponents of trophy hunting that it delivers significant conservation or community benefits, or serves as a means of removing old, ‘redundant’ or ‘problem’ animals. Mopane was none of these.”

Aside from the money, killing animals for “fun” doesn’t sit well with many people –including Block. “Yet, as with Cecil six years ago, the perverse pleasure some people derive from killing iconic animals brought this noble lion’s life to a tragic end. Another trophy hunter spending tens of thousands of dollars on a globe-trotting thrill-to-kill escapade shows humanity at its worst. It is shameful that the U.S. has the distinction of being the world’s biggest importer of hunting trophies. Enough is enough.”

Mopane, Cecil, and dozens more died a brutal death, and it needs to stop. Sign the petition below to urge Zimbabwe to end trophy hunting forever. 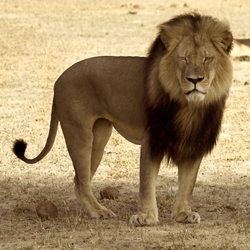 In July 2015, a wealthy American hunter and his local guides lured Cecil, a well-known and beloved lion, off his nature preserve so that the lion could be killed for sport.

The brutality and heartlessness of this act has thrown into light the disgusting reality of trophy hunting and the devastating impact it has on animals and conservation efforts.
Ban trophy hunting!