A tortured donkey was found trembling on the side of the road barely breathing and covered in open wounds. On the donkey’s back there were names of politicians written in marker. A kind man that found him sat with the suffering donkey until help arrived.

Ayesha Chundrigar Foundation (AFC), a non-profit that rescues and tries to rehabilitate injured strays in Pakistan, was contacted about the donkey and worked through the night to set up a transport to their shelter. The rescue team was heartbroken and infuriated when they saw the abused donkey.


“We have named him Hero as it takes a true hero of the heart to stand quietly, collapse helplessly, and endure painfully as this donkey did,” the rescue posted along with images when they first rescued him. “With the upcoming elections looming upon us, no one is spared from the wrath of this time…not even the most helpless of animals.”

Hero could not stand on his own and was skin and bone from being starved before the horrendous abuse. “This is a hate crime. A donkey beaten to pulp, punched in the face and abdomen several times, nose broken, kicked all over his body until he collapsed, has rope marks and a car rammed into him….all of this to describe one political party as an “ass” by some hooligans as written on the poor donkey’s body.” 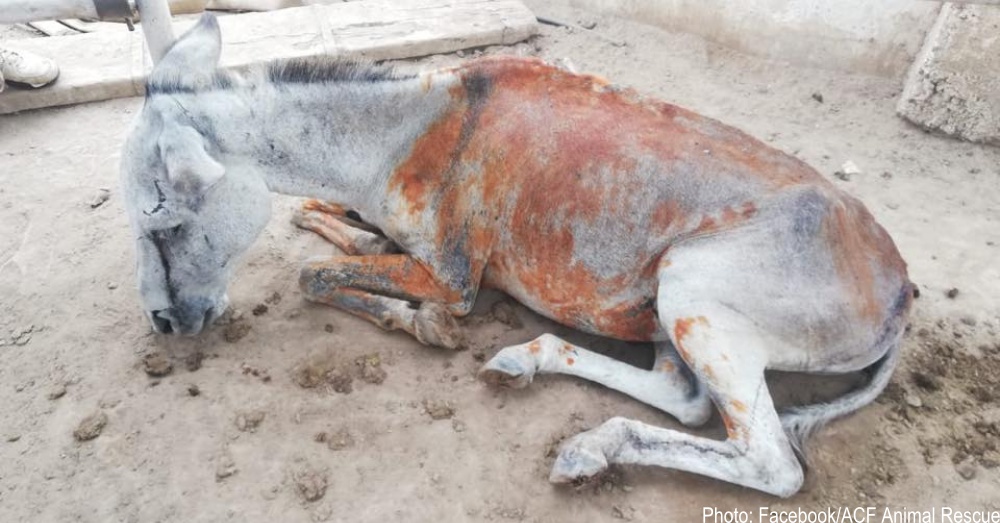 The rescuers try to reassure Hero that he is in a safe place. However, “He winces at any touch because he thinks each one will hurt.” Immediately, he was given pain medication and set up with IV fluids. The women hand fed the donkey and offered him water. Even though he had a broken jaw, he drank water and slowly ate some crushed oats and barley.


“He is not eating much and his body is still stiff yet shaking in fear. His wounds have been cleaned and he has been given pain killers.” The rescue kept followers updated on Hero’s progress. He was in critical condition when he arrived. “We kept his temperature under control, massaged and cuddled him to calm down him as he would try take faltering steps, distressed, suffering from post traumatic stress, his heart pounding a mile a minute.”

Hero survived a week at the rescue with the team doing everything possible to make him feel loved. Sadly, he died from his injuries. “His internal injuries due to the violence he faced, were too much for him to bear. He just saw a week of happiness, peace and love with us, and we saw this beautiful, intelligent personality who was abused and tortured for absolutely no reason, for no fault of his own.”


The rescuers were heartbroken and could not believe that people could be so cruel to such a sweet animal. “We are to be blamed for not bothering to raise our voices for the most ignored, neglected and tortured inhabitants of our society. We have to think and act upon this, there cannot be and should not be more Heroes who suffer at the hands of humans,” posted the team with the announcement of Hero’s death. Rest in peace, Hero.