A Tennessee woman didn’t think twice about jumping into a frozen pool to save her beloved pit bull.

A backyard surveillance video captured the terrifying incident and the heroic rescue.

Jennie Tatum let her two dogs, Olaf and Sid, out in the backyard to go to the bathroom and play in the freshly fallen snow. She kept a close eye on the dogs as they took off running and watched in horror as Sid slipped into the icy pool.

She rushed out of the home and jumped in the pool to save her sweet boy. She smashed through the thick ice with her hands trying to locate him. “It was pure adrenaline. I was not even thinking about being cold,” Tatum told WTVF.

When she couldn’t find him, she got out of the pool to get a better look. All of a sudden she spotted him and ran back to save him. He was trapped under the ice.

“I think he went into shock as soon as he hit the water and he had floated up underneath it…” Tatum said.

She jumped back into the freezing water and lifted Sid out, who was barely responsive, and placed him on the side of the pool. As soon as she was out of the water, she picked up the 50-pound dog and ran to the house to warm him up.

Thankfully, a veterinarian lives in the neighborhood and Tatum called her for help. Sid spent about a minute underwater and veterinarian April Smith said, “I don’t think this dog had another minute based on his symptoms.”

She credits Tatum with saving Sid’s life and administered an emergency shot before he was brought into an emergency clinic.

Sid has fully recovered and is back to his playful self. “What an eventful 36 hours! Never would have thought I’d have this guy back in our home after falling in the pool and getting stuck under the ice yesterday,” wrote Tatum. She posted photos of Sid resting by the fire and said his brother was worried about him as well.

Tatum does not see herself as a hero. She told WSMV, “He’s extra special, but I would’ve done it for anybody, any animal. They’re like our family.”

The rescue video has gone viral. Check it out below and don’t forget to share!

Tennessee was just one of many states impacted by winter storms that brought unseasonably cold temperatures and snow last week. While Sid’s story had a happy ending, many are still struggling in Texas.

You can help by donating below to help people and pets affected by the deadly winter storms. 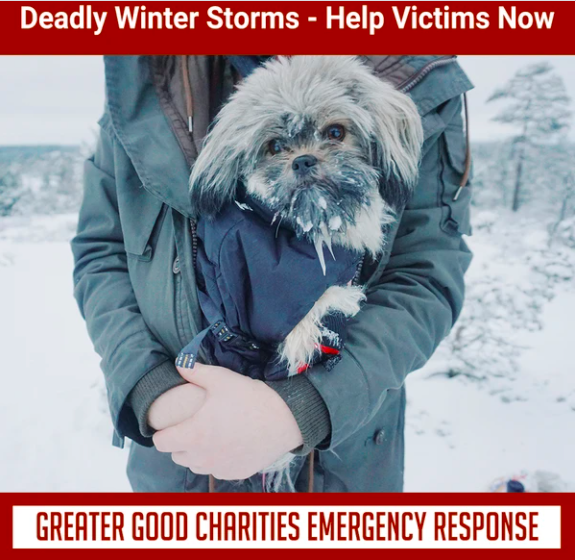 Days of snow and ice storms crippled the power grid and left millions without electricity and heat last week. Your donations will directly fund disaster response efforts, helping people, pets, and wildlife where it’s most needed.
We must act quickly!