His Legs Were Chopped Off For Chewing Shoes, But This Dog’s Recovery Wheel Warm Your Heart

Some people place a high value on shoes.

For a man in Thailand, they were held in such high regard that he severed his neighbor’s 9-month-old dog’s front paws for chewing them. The neighbor compensated him for the shoes, as he had asked, and yet he still retrieved a sword from his home and used it to hack up the dog’s legs.

According to Goodfullness, the man threatened to kill his neighbor’s other dogs, as well.

The man was subsequently charged under the country’s Animal Welfare Act and sentenced to a month behind bars. But the young dog, named “Cola,” spent a much longer period recovering from the torture. 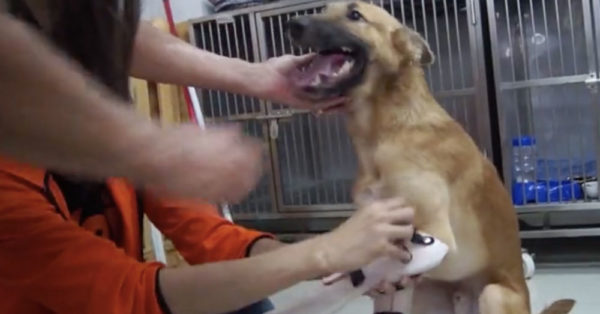 “While this is incredibly lenient, it is important to remember that, had this barbaric attack taken place two years ago, the perpetrator would have not faced any charges,” wrote the Soi Dog Foundation, the agency that rescued Cola. “Thailand only introduced its first ever animal welfare law in late 2014, and it is still very much a work in progress.”

Cola is now moving around, thanks in no small measure to the acts of the SDF, which solved the dog’s initial logistical issues and covered medical expenses. The foundation fit Cola with a wheeled cart and prosthetic legs. But as his owner surrendered him in fear of retaliation, Inside Edition reports, Cola was left without a place to live.

Compassionate members of the SDF stepped in once more, and co-founder Gill took Cola from Bangkok back to her home in Phuket.

“Gill herself uses prosthetics, having lost both her legs while saving a dog in 2004,” continued the SDF post. “Cola is now living with Gill and husband John, enjoying the comforts of a loving home and walks on the beach.”

While Cola recovers in Thailand, a pair of pit bulls are doing the same in Minneapolis after being shot by a police officer, who reported a different story than security footage shows. Click the link below to read more about this case.