It was the love and light within each Who in Whoville that persuaded the Grinch to return the gifts he took. Had he stolen anything off Cameo Wood’s front step, however, it’s likely the story would have concluded on a much less sweeter note.

Thieves tried to ruin Wood’s holiday by swiping several packages from the porch of her San Francisco home shortly after they were delivered.

“I got a thing from Amazon that says your package arrived, so I run downstairs and there’s nothing there,” she told NBC New York.


The package purloining perps have absconded with a number of Wood’s deliveries in the last few months, most recently several gifts and medicine for Wood’s sick cat. Even after police reports were filed and security cameras installed, the robberies have continued.

So she decided to take matters into her own hands and exact a stinky revenge on the holiday thieves. It’s safe to say Wood subscribes to the Kevin McCallister school of thought, rather than that of Cindy Lou Who.

“I was cleaning my cat box; my cat was sick,” she said. “I thought this would be really nasty to put in a package and leave for people.” 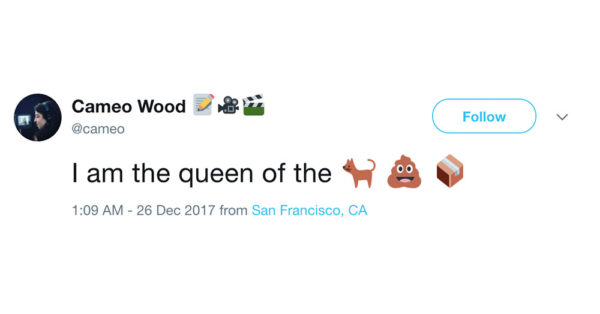 Wood boxed up six of her special packages in conspicuously smiling Amazon boxes and left them out on the front step.

“I totally didn’t think people would steal packages on Christmas Eve or Christmas Day, but they did, all six,” she told NBC.

Wood means well, she just isn’t interested in being burgled any longer.

“I feel sort of bad these people are in a situation where they are stealing,” she said. “But I also hope they look at packages a little more circumspect and don’t think we’re easy pickings here.”

From now on, delivery drivers will hopefully wait for Wood’s signature before they leave, while any potential package thieves may want to resolve to avoid her street altogether.

As Wood and her cat look forward to a brighter new year, another Christmas crime threatened the happy holidays of a pediatric doctor and a night nurse at a children’s hospital in England. The couple returned home to find their presents stolen and their cat missing. Click the button below to read on, and learn how this tragic tale found its happy ending.