A stray dog was barely surviving life on the streets until he met a kind-hearted man.

It was a typical hot summer day in Dubai when Anand Raman came upon a stray dog. The dog was curled up underneath a parked car eating scraps of food. Even from afar, Raman could see the dog was exhausted and in need of some TLC.

He slowly approached the dog and once they made eye contact, the dog wobbled over to him. He noticed that the dog seemed to move differently on his front legs. Raman helped the dog into the car and then the sweetest thing happened. The moment the stray dog realized he was safe, he rested his head on Raman’s shoulder and fell asleep. 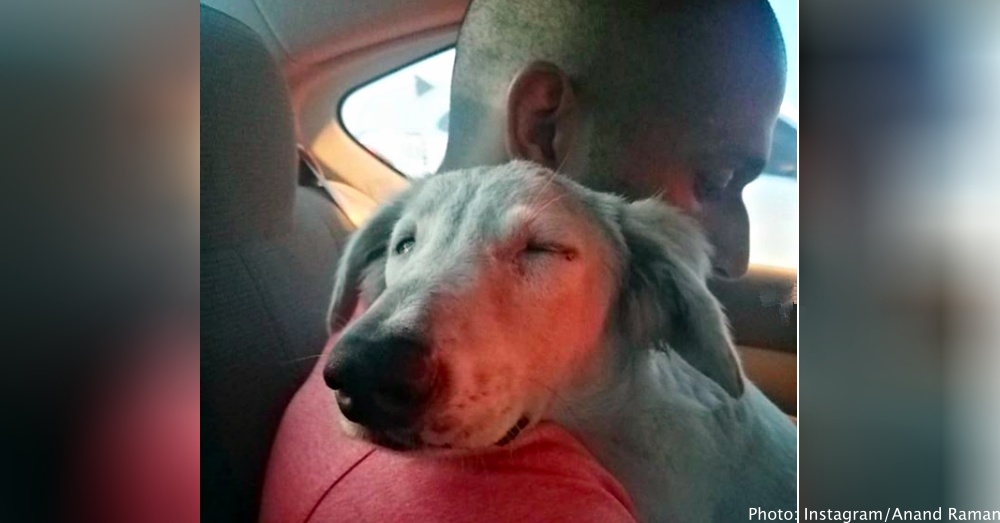 The dog was exhausted and who knows the last time he had a peaceful night’s sleep.

Raman was on his way to see his sister, who ended up driving him and the stray dog to the vet. The vet examined him and found that his strange walk was from being malnourished. His movement returned to normal once he returned to a healthy weight.

The dog was brought back to Raman’s home and received a bath, which revealed his pure white coat. He was covered in dirt and grim, but his snow white coat led to his name, Snowy. He was unsure of life indoors at first, but adjusted quickly when he realized he was safe.

“When I would take him for walks, he was constantly terrified that I was going to leave him back on the streets, so he would yank his leash away from me and run back into the parking lot of our building complex,” Raman told The Dodo. “This happened for a while until he realized we were not going to let him go anywhere fast.”

Snowy is finally in a loving home and he couldn’t be happier. Raman posted a video of Snowy in the “What the Fluff” challenge, as well as other loving photos on Instagram. He posted, “He’s curious, a great guard dog, smart and a little too energetic.”

Snowy shows his gratitude daily through unlimited kisses. Thank you for saving Snowy! Adopt don’t shop. There are so many dogs like Snowy looking for a loving home. Adopting will be the best decision you ever made.