When Aiden Heath learned he’d be living with type 1 diabetes, he was told there would have to be some changes made.

The eight-year-old Waitsfield, Vermont, boy researched glucose monitoring equipment and other ways people in his situation made life easier. He discovered that a unique trait of dogs is their ability to sense low blood sugar by scent, as much as 30 minutes before the sensitive modern equipment even picks up a reading. Despite their uncanny ability to help someone with type 1 diabetes, Aiden found, extensive training backgrounds make such dogs very expensive.

A service dog for Aiden would cost about $15,000, and that was money he certainly didn’t have. Following his mother’s advice, the boy began saving his pennies. He saved them for four straight years, and when his total neared $6,000 in April, his local news team spread word of Aiden’s goal, prompting an outpouring of support from people across the world. It wasn’t long before Aiden, assisted by his mother, Jenni Heath, had over $20,000 to put towards a service dog.

Aiden knew exactly which dog he wanted, too. From pictures and videos, Aiden was able to pick out a chocolate Labrador Retriever named Angel who was being trained in Nevada. Shortly after Angel passed her service tests, she was on a plane to Vermont, where an eager Aiden awaited.

“Aiden is over the moon,” Heath told ABC News. “He was on pins and needles waiting for her.”

Along with comforting Aiden, Angel will give the Heaths the comfort of knowing their son’s glucose levels are in check. And if they spike or dip too low, Angel knows what to do. 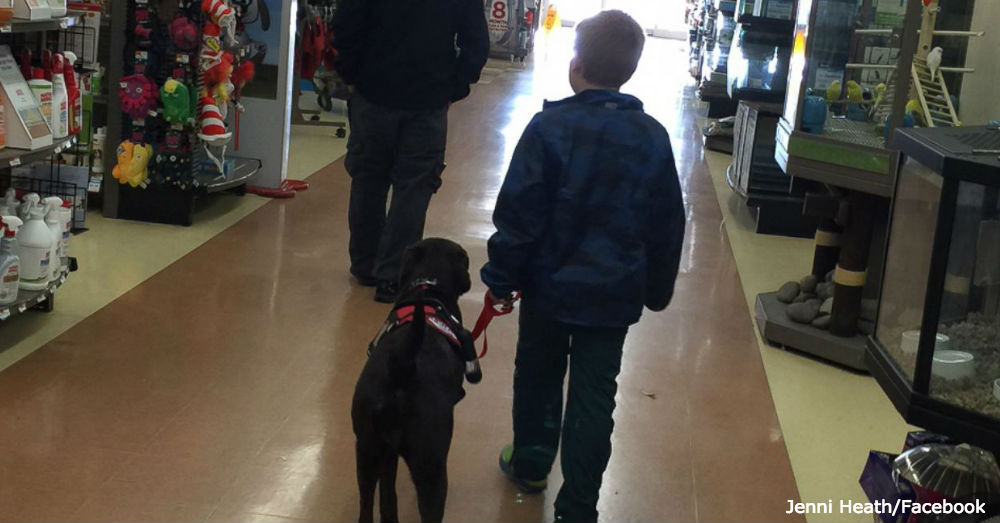 According to Diabetic Alert Dogs of America, dogs like Angel are trained to sniff out subtle changes in the chemicals our bodies give off through breathing or sweating. These chemicals are undetectable to humans, but they play a crucial role in indicating hypo or hyperglycemia. By training a service dog to detect these markers, doctors are essentially using the canine’s natural talents to save countless lives.

Angel arrived in Vermont on Monday, Oct. 10 and immediately bonded with his new family. The following morning, Aiden showed up for school with a new friend to introduce to students and staff.

“We have been so amazed by the outpouring of support,” Heath said. “He is feeling the love. There are no words.”

With Angel’s assistance, Aiden has a bright future ahead. Service dogs have also been found to help military veterans by lessening their perception of physical pain, decreasing agitation and aggression, increasing social interaction, and helping them to manage daily living, among other benefits. There’s no doubt service dogs for PTSD can be part of an effective treatment to improve the quality of veterans’ lives, which is why the VA should cover the cost of service dogs for psychiatric conditions.

Follow the button below and tell the VA to change the U.S. Veteran Service Dog Program to cover service dogs for any troop that needs one!

Not all wounds are visible. The VA must stop denying the effectiveness of service dogs for PTSD and other psychiatric conditions!
Help Heal These Heroes!
Make a difference