Nancy Segula, a 79-year-old cat lover living in Garfield Heights, Ohio, is being punished for having a kind heart and feeding stray cats.

Nancy has always been fond of cats and took in a few once her neighbor moved and left the cats behind. She offered them food on her back porch and did her best to look after them. Slowly, more cats started to arrive to fill their bellies.

However, her neighbors were not cat lovers and did not want the stray cats around. They called the animal warden and reported the sweet woman. Sadly, there is an ordinance that makes it illegal to feed stray cats and dogs in the town.


After receiving her first citation in 2017, Nancy continued to feed the cats because she could not let them go hungry. She did not see the harm in being kind to the cats. She received three more citations with the last one resulting in a court date.

She arrived to the courthouse nervous but ready to defend her actions. The judge sentenced her to 10 days in jail for her violations. She was shocked at the punishment, as was her family. Her son told Fox 8, “I couldn’t believe my mom was telling me that for what she was doing out here, feeding some stray animals, she gets 10 days in a county jail. I couldn’t believe it.”

He went on to say, “Why would you send a 79-year-old woman to jail just for feeding cats?!”

Nancy agrees that the punishment seems extreme, “It’s too much of a sentence for me for what I’m doing, when there are so many people out there that do bad things.”

People around the country agree that the punishment does not fit the crime. One person wrote, “That does it, let everybody take all the stray animals and birds to the Judge’s house to be fed.” Another said, “This is not OK. Instead of wasting public money keeping her in jail, spend it on neutering the cats (so they don’t breed excessively) and on a little cat food to help her out. What sort of a nation are we turning into?” 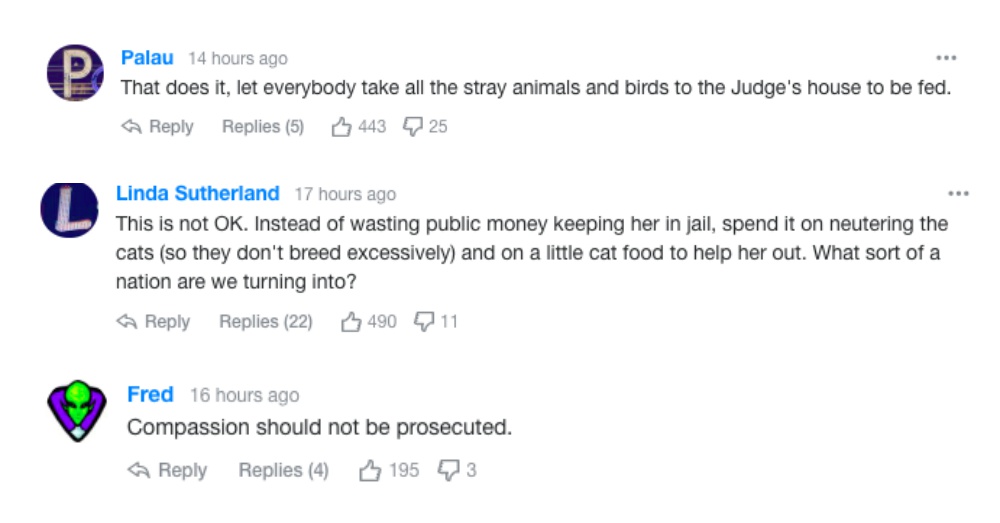 One man said it best, “Compassion should not be prosecuted.”

Segula is scheduled to arrive at the county jail on August 11 to serve her time. However, she has a court date with Judge Jennifer Weiler who wants to hear all sides of the story and decide if jail is the proper sentence.