A trip to the veterinarian’s office isn’t what many pets might consider a walk in the park, but for pets near Denver, Colorado’s Northfield Veterinary Hospital, each checkup presents a chance to make a new friend.

It’s certainly not unusual to find animals running in and out of NVH, but Ron the kitten has a more permanent post at the hospital. Rescued from a feral colony at just 3 months old, Ron came to NVH with his brother Harry and sisters Hermione and Luna. Ron was the most timid of the pack but has since grown into one of the most important roles at the facility.

All it took was the opportunity to connect with other shelter animals for Ron to come out of his shell.

“He would approach any other dog and cat without fear, and would try to climb into their cages or join them up on the table if they were getting vaccines,” Shelly Sandel, veterinarian and co-owner of Northfield Veterinary Hospital, told The Dodo. 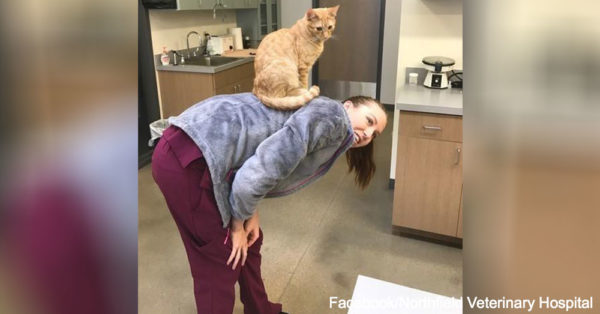 Ron is now the NVH therapy cat and a friendly feline to anyone who visits the hospital. He lends a personable paw to newcomers and comforts those undergoing surgery. 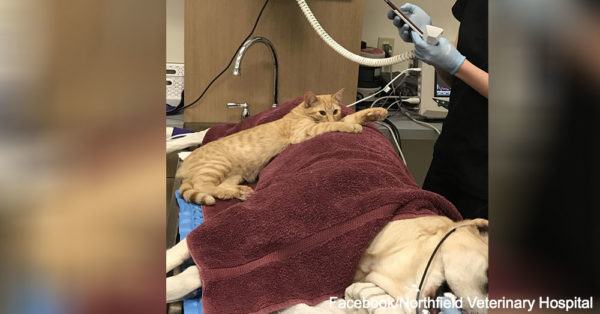 “He started to cuddle up to any pet who was under anesthesia for dental work (not sterile procedures) and provide them with body heat,” Sandel said. “He would even groom them while they were asleep, seemingly trying to provide them with comfort.” 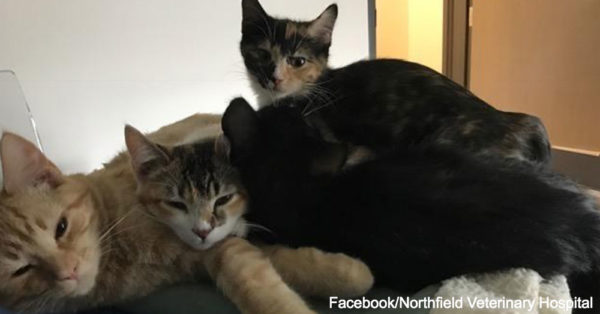 Even with aggressive animals, Ron has proven to be one of the hospital’s best employees. Formerly vicious felines have become playful as kittens around Ron.

“We once had a very aggressive kitty come into our hospital, and the owner warned us that it would be almost impossible to examine him due to his temperament,” Sandel said. “We usually had Ron locked up around aggressive kitties, but he escaped from his hold and ran up to this very frightened kitty, and they became friends—touching each other and grooming each other. And the ‘aggressive’ kitty was fine after that and let us examine him.” 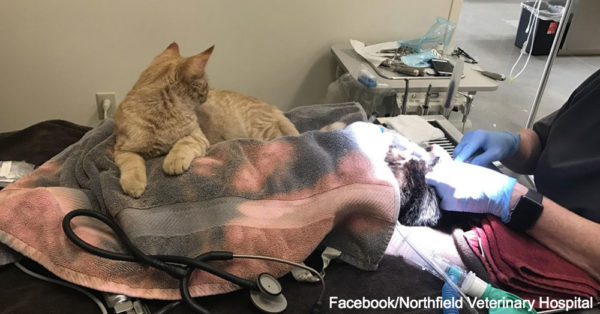 NVH staff shared evidence of Ron’s hospitable nature on Facebook, with no shortage of approval from their followers, many of whom hoped he could calm their own anxious animals. And as many other shelter animals yet dream of daily, Ron was soon adopted by a loving family.

“He lives with a family who has a young child and an older dog, and, needless to say, they all love Ron,” Sandel said. “The older dog is usually a bit cranky around other animals, and even she will cuddle with Ron.” 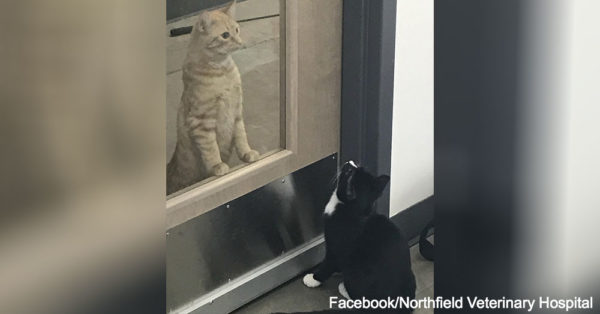 Ron may be enjoying retirement, but his old hospitable habits have yet to fade.

“He is the most outgoing, fearless, happiest cat I’ve ever been around, and he’s still just a kitten,” Sandel said. “We miss him very much, but we’re so excited that he has found such an amazing family to take care of him.”

The Animal Rescue Site wishes the best to Ron and his new family. Had he been rescued in Florida, Ron’s skills might have come in handy during a recent rescue of nearly 50 dachshunds from an overwhelmed owner in Arkansas. Click the button below to read more.