See How Romeo Is Saving The Lives Of Humans And Dogs Alike!

There’s no telling how many lives Romeo has saved, but he’s finally being hailed as a hero to both humans and dogs.

The Staffordshire bull terrier mix assists victims of stroke and dementia at the Lister Hospital and around Welwyn GC, the Hertfordshire Marcury reports, and visits the Royal Veterinary College every three months to donate blood, saving the lives of at least 22 other dogs.

Romeo was nominated for a local animal charity’s “devotion award” by owner Steph Hartley, 29, a staff member at the hospital. Hartley says it was clear from an early age that Romeo had a compassionate soul. 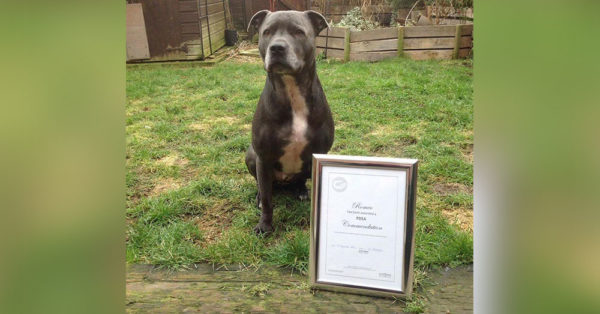 “When we adopted Romeo at five months old, we had two miniature dachshunds at home,” Hartley told the Hertfordshire Mercury. “Sadly, the older dachshund, Shadow, had been diagnosed with lymphoma and was receiving chemotherapy at the time.”

Romeo could understand his sibling was in pain and losing strength. “Somehow, Romeo was able to sense this and would stay by his side and lick him gently to comfort him after his treatment,” Hartley said.

And when he’s around Hartley’s 92-year-old grandmother and others at a care home in Stevenedge, he now provides comfort for those suffering from dementia, since being approved as a therapy dog, the Daily Mail reports. 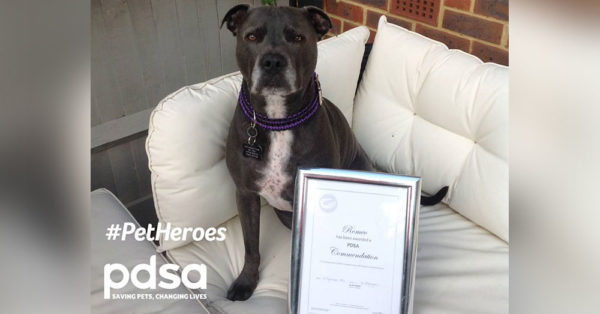 “The PDSA commendation recognizes animals who display outstanding devotion and celebrates the amazing ways they enrich our lives,” said Rebecca Ashman, veterinarian for the PDSA, an organization that provides free veterinary care to the sick and injured pets of people in need. “It’s clear that Romeo has had a huge impact on Steph and her family, as well as all of the people and pets he helps through his PAT work and canine blood donations.

Pit bulls are legal to keep as pets in most of the United States, but for many dog lovers in England, such animals are deemed dangerous. Owners of banned breeds, if found guilty under the Dangerous Dogs Act, can be fined any amount a judge sees fit and sent to prison for up to 6 months while their animals are destroyed. Click the link below to see how you can help!

Since the Dangerous Dogs Act was introduced in the UK in 1991, the region has been rife with horror stories of family dogs being taken from their homes and put to death because their breed has been categorically branded a threat.
Tell the UK Parliament and British Prime Minister Theresa May that there is no place for BSL in the civilized world!
Make a difference!