Like the start of many a lasting friendship, this one began with an exclamation of surprise.

“Look what we found on the road,” Charles Trippy said. “I guess we just adopted a cat.”

Trippy and his wife, Allie, found the small kitten while stocking up on supplies before Hurricane Irma made her landing in southern Florida. Allie picked the tiny cat up off the road and moved her to the couple’s car, while Charles assumed a mother and siblings would be nearby, LoveMeow reports.

No such luck. The kitten was frightened and all alone and held tightly to Allie until they arrived home.

That night, after being treated to a nice meal and a warm bed, the kitten fell asleep on Charles, and Irma’s clouds began to darken the Sunshine State.

“I can’t believe we found this kitten just right before the hurricane,” Allie said.

But find her they did, and happy she was. The kitten continued to purr throughout the storm, likely happy to be in the hands to such caring humans.

“It shows that we should be glad that we didn’t leave. We saved a life,” Charles said. “She sounds like a lawnmower.”

Once danger of the hurricane had lapsed, Charles and Allie took their new feline friend to the local vet, where they learned the 13-ounce fuzzball was no more than a month old.

She’s since been named “Rica,” as in hur-RICA-ne.

“I got a buddy. I never thought I would get a cat buddy,” Charles said.

Rica is safe and dry in her new forever home, but there are plenty more pets that need rescuing. Click the link below to see how you can help the animals displaced by Hurricane Irma! 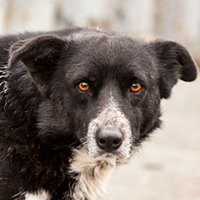 Hurricane IRMA, a category 5 storm and the most powerful Atlantic Ocean hurricane ever recorded, has crashed its way through the Caribbean and into Florida, high winds and flooding wreaking havoc across a huge area. Shelters have been damaged and destroyed, families and their pets displaced, and fresh pet food and supplies are limited due to the destruction.
Be a part of the movement to help shelters and pets recover from this disaster.
Help now!