Carnivore Meat Company has announced a voluntary recall of their Vital Essentials Frozen Chicken Patties Entrée for dogs, which may be contaminated with Salmonella.

The affected products have been distributed in the following U.S. states: California, Georgia, Rhode Island, Florida, Texas and Washington. 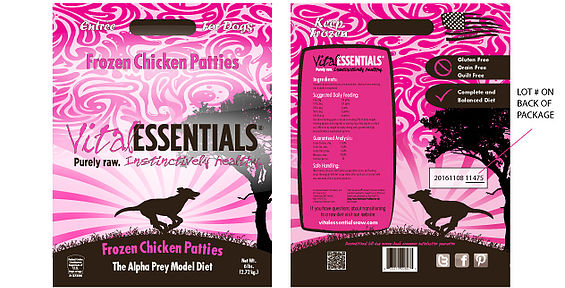 Why was it recalled?

The contamination was discovered after a nationwide collection initiative issued by the FDA in June, 2015. The Agency notified Carnivore Meat Company when one of the samples collected tested positive for Salmonella. Luckily, no customer complaints have been reported and no other Carnivore Meat Company products are involved.

What are the symptoms?

If your dog has consumed the chicken patties affected by this recall, keep an eye out for the following symptoms of Salmonella infection:

If you have purchased a bag of Vital Essentials Frozen Chicken Patties, call the company at 920-370-6542 to inquire about a replacement or a refund. If your bag has been opened, dispose of the food as soon as possible, ensuring your pet won’t find it.

There were 35 pet food recalls in 2015, leading to hundreds of deaths and thousands of dollars in vet bills. That’s unacceptable.

G. H. was raised in Minnesota, but currently calls Seattle her home. She's a blogger, editor, and journalist, and she's written everything from news reports to restaurant reviews. If she's not putting pen to paper, G. H. is probably experimenting in the kitchen, chilling out on her yoga mat, or running through a city park.
Whizzco