This unlikely duo is almost like a real-life Tom and Jerry, except it’s a cat with a rat instead of a mouse…but close enough! Maggie Szpot found Ranj, an orange tabby cat, as a stray kitten in Cedarburg, Wisconsin.

Szpot already had pet rats at the time, but as Ranj got older, she added two new pet rats to the family, Peanut and his sister Mocha. Szpot was worried that having too many rats around her cat would bring out the hunter in him, but boy was she wrong!

Szpot brought home the two rats when they were just babies. She put them in a fenced-in area in the house to run around, and the curious kitty found a way in to check out his new siblings. It was friendship at first sight for Ranj and Peanut! As time went on, they formed a special bond and became inseparable! 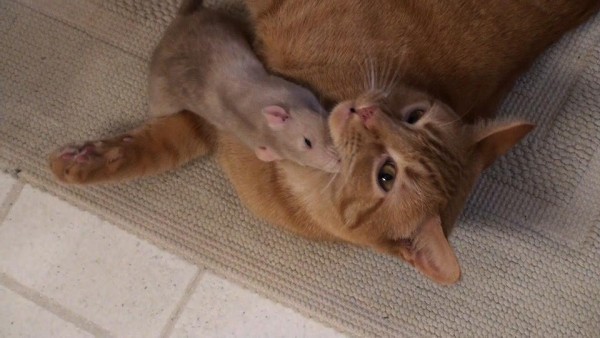 Szpot says the two shared the cutest moments together and even ate food out of the same bowl at the same time. They loved to snuggle together and lick each other’s fur. Since Ranj is a cat, there are times that he wanted to enjoy being on his own, but Peanut didn’t quite understand the concept of personal space.

In the video below, you can see Peanut following Ranj around everywhere he went. She climbs all over Ranj and he doesn’t even mind it.

Unfortunately domesticated rats don’t have long life spans, and Peanut sadly passed away at the age of two. Spot says Ranj misses his BFF, but has since made a new one! Now he has a best friend who is more like him. Timmy, a cat, is the new addition to the family and the two get along great!