Quaden Bayles is no taller than your average mailbox, but together with Buddy — a rescued Shih Tzu with Dwarfism like Quaden’s — the pair are standing tall and spreading an important message.

Quaden was diagnosed with achondroplasia shortly after he was born. The most common form of dwarfism, achondroplasia is a genetic disorder that prohibits bone growth and can lead to other serious health issues. Now only 5 years old, Quaden has undergone four major surgeries, each requiring anesthetic procedures that were especially risky given his condition. 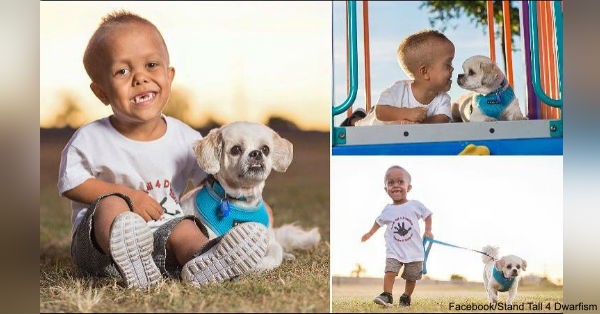 “Every surgery is either going to kill him or save him,” says Quaden’s mother Yarraka Bayles.

Unfortunately, Quaden’s dwarfism isn’t just a physical issue. It comes with a social stigma, one which the boy, his Shih Tzu, and his mother are taking on with the campaign Stand Tall 4 Dwarfism. The campaign raises awareness of dwarfism and fights the stigma surrounding it.

“He sees people staring before I do sometimes,” Bayles told the Daily Mail. “Some people will judge him on his physical appearance and think otherwise, but they’re really not worth the energy. There are so many uneducated people in the world – it’s really sad that they don’t get to see the joy.

Bayles said Quaden doesn’t let the pain get to him. “He just smiles and puts up with it.” But the going has gotten easier since finding Buddy. Bayles said that, while Quaden had once wished he were dead, he has found a way out of those dark thoughts by connecting with the dog, and by realizing his condition is what makes him unique.

“Quaden now proudly accepts that he’s got dwarfism, because Buddy’s given him that reason to think that it’s cool,” Yarraka told TODAY. “So he tells everyone, ‘My dog has dwarfism like me,’ and it’s the first time we’ve ever, in Quaden’s five years of life, heard him say the word, because we are not allowed to say dwarfism or achondroplasia.”

With the help of Buddy, Quaden is living a full and happy life. The same cannot be said for many American veterans. It can be hard for men and women in our military to return to normal life, perform daily activities, connect with others, or manage the stress of what they’ve been through. Trained service animals offer a way to manage the symptoms of PTSD without resorting to the antipsychotics often prescribed to these veterans. Sign our petition in support of a service dog pilot program for veterans coping with PTSD.