The life of a dog is not always easy. When that life includes memories of fighting, mistreatment, or other stressful events, it may not be a stable one at all.

Just like some of our nation’s bravest service members, canines have recently been found to show symptoms of PTSD. When a dog is in this condition, it may act out with unexpected aggression, and even have to be euthanized.

The National Institute of Mental Health defines PTSD as “an anxiety disorder that can develop after exposure to a terrifying event or ordeal in which grave physical harm occurred or was threatened. Traumatic events that may trigger PTSD include violent personal assaults, natural or human-caused disasters, accidents, or military combat.”

In today’s military, the U.S. has used dogs in explosives detecting and search and rescue efforts. The New York Times reported in 2011 that, of the 650 dogs deployed, more than 5 percent had canine PTSD. 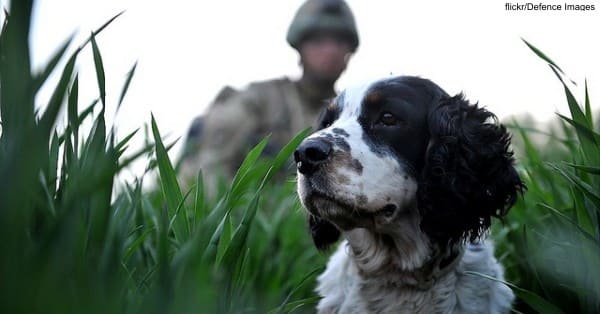 Gina, a German Shepherd who was trained as a bomb sniffer for U.S. military service in Iraq and Afghanistan, started showing PTSD symptoms after her 6-month tour. In a NY Daily News story, Master Sgt. Eric Hayes, kennel master at Peterson Air Force Base, said while many veterinarians don’t like to give PTSD diagnoses to animals out of respect to service members , Gina exhibited the worst symptoms of canine PTSD he had ever seen.

Similar behavior has been reported in “civilian” dogs after traumatic events at home, too. After Hurricane Katrina decimated New Orleans in 2005, many of the people who we fortunate enough to find their pets reported differences in their mood. MSNBC covered the National Guard’s efforts to shelter displaced animals there, and found that their symptoms were similar to combat PTSD.

When it comes to caring for an animal with PTSD symptoms, the best effort includes strong support, Animal Wellness Magazine reports. By maintaining a stable space for the animal, keeping to a routine, and regular exercise, some owners have found results without supplements or medicine Of course, it’s always advised to consult a veterinarian before acting on any changes to your pet’s lifestyle.

Animals and humans share many qualities, among those, unfortunately, is a vulnerability to domestic violence. By signing this petition, you can tell Congress you want pets to be protected in domestic violence incidents under the Pets and Women Safety Act.