Lisa Eicher and her family adopted Penny the pig a couple of years ago when she was just eight weeks old. Penny got to roam the family’s large acreage in Alabama. But a job brought them back to Houston, Texas, where they had to live in an apartment until they found a house.

Unfortunately, Penny was unable to stay in the apartment, but she was in good hands while her family searched for a house. The number one requirement on their house hunt, was a home that was a good fit for Penny. Thankfully, they soon bought a house, and Penny was able to live with them again.

The Eicher family absolutely adores Penny. Eicher’s kids all love spending time with her, whether it’s playing with her outside, or even taking a nap with her. There hasn’t been much to complain about for the Eichers. They were loving life together. But then Hurricane Harvey came thrashing through Houston, destroying everything in its path and leaving many people in Houston homeless.

As the rain began to fall, Penny’s pen was already starting to flood, so they put her in the garage to keep her safe. But they had no idea how much water would come so quickly. The next morning, they woke up without power and realized that poor Penny was trapped in the garage. They were unable to open the garage doors, but the floodwaters were rising quickly and they knew they had to get her out before it was too late. 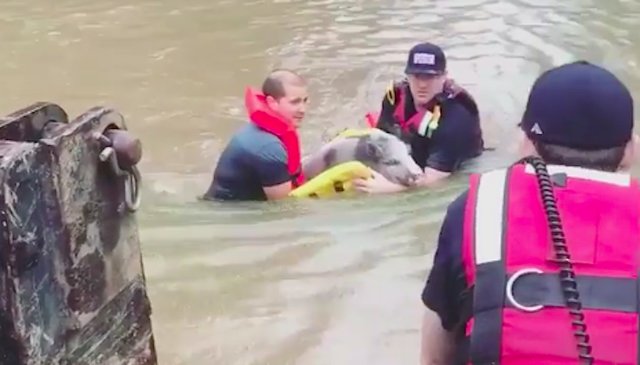 When firefighters showed up, they were yelling that the family needs to get out immediately “We’ve got two kids with Down’s Syndrome, a three-legged dog, and a pig – all of whom will be freaked out,” Eicher told the firefighter.

Eicher was concerned about getting Penny out when they evacuated. She didn’t know how it would work, but leaving her behind was not an option. The firefighters helped the family onto a rescue raft, along with their dog. Then they swam Penny onto the raft as well. The firefighters then brought the family to a nearby gas station.

While they were seeking shelter at the gas station, their faith in humanity was restored. They were brought blankets and sandwiches, and everyone was so kind. People also found joy in taking selfies with Penny. The family then went to stay at a friend’s house while they waited out the storm.

Unfortunately, their house was damaged and is now under construction. But what matters most is that their family got out safely and that all of them, including Penny, are OK!