Inside a locked crate alongside Route 80 in New Jersey, animal control officers found an “abandoned, disabled, and completely helpless” chihuahua.

Stanley, as he was later named, weighed 21 pounds, over double the normal weight, and was unable to walk. The 8-year-old dog was rescued by The Ramapo-Bergen Animal Refuge after they heard his heartbreaking story. 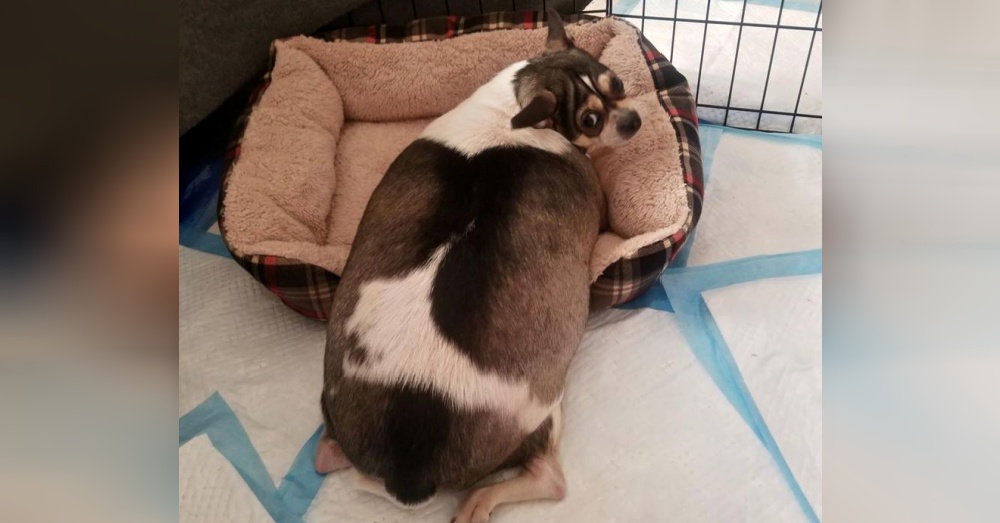 “All four of his legs are so badly deformed that Stanley is unable to walk,” wrote the rescue. Stanley is experiencing love, possibly the first time in his life, and he cannot stop smiling. An experienced and loving foster mom took him in and “makes sure he gets to see the sun and feel the grass every day.”

The sweet and affectionate dog is loving life and enjoys his daily walks in a stroller. Thanks to a low-fat diet and veterinary care, Stanley has already lost weight. He has a temporary device that allows him to move, but once he reaches a normal weight, which should be around 10 pounds, he will be fitted for a wheelchair.

“His story is hard to tell and even harder to imagine,” posted the rescue. “Stanley lives for today, but our minds can’t help but wander to Stanley’s past. In our moments of despair, we imagine Stanley trapped on the side of the highway, watching cars speed by, scared, confused and hoping for his people to return.”

While most cruelty cases involve malnourished and emaciated dogs, the rescue says that Stanley’s story is a reminder that animal abuse comes in many forms.

Stanley has not let his past get him down and is an inspiration to us all. The rescue recently posted an update that said, “Despite his limitations, Stanley is loving life. He is enjoying the beautiful weather and improving every day.”

Stanley Update ‼️ Despite his limitations, Stanley is loving life. He is enjoying the beautiful weather and improving every day. His foster mom takes him for walks in his stroller around town, and he has no shortage of fans! His glowing smile is a reminder that we all didn’t just quit on little Stanley, right when he thought humanity had. Thank you for all the love you’ve shown him, and RBARI. We hope to keep providing positive updates as Stanley continues his journey. 📸: @lynofrane

Thanks to kindhearted people, Stanley is in a loving foster home and will eventually be put up for adoption. The rescue thanks all their supporters for their help with Stanley’s case. “His glowing smile is a reminder that we all didn’t just quit on little Stanley, right when he thought humanity had.”