Gavin Orlowski only had seconds to act before a defenseless cat was killed in the street.

Crossing over the Grand River in Grand Rapids, Michigan, Orlowski and his mother, Erin Brown, saw a gray tiger cat thrown out the window of a van ahead of them.

“I hear my mom…she’s driving, and I’m in the passenger seat and she’s like [gasp],” Orlowski told WZZM. “There’s a cat being thrown out a window, running all around the street because the van in front of us just threw it out.”

The vehicle sped off, and the cat was left on the bridge, darting to avoid passing cars, but Orlowski wasn’t about to let his mother pass him by, too.

“I was just thinking like I need to get this cat,” the 14-year-old said. 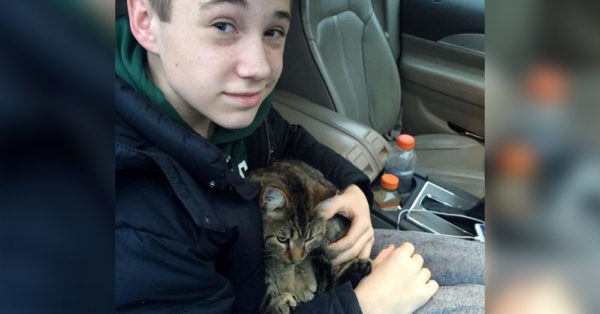 Orlowski got out of the car to block traffic while the cat made its way to the edge of the overpass.

“I turned back and held up my hand,” he said. “The cat is like hanging off the over-bridge, like 75-percent of his body is like over the bridge.”

He managed to wrangle the cat and get it into the car. The animal was visibly frightened and held close to Orlowski underneath his jacket, Pawpulous reports. Then the boy and his mother set off in search of the van. 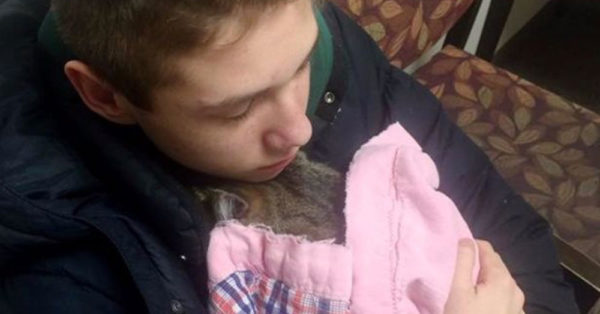 The cat was safe, but the culprit had absconded.

“It was gone, the truck just bolted out of there,” Orlowski said. “Why wouldn’t you just let a cat go, at least just let him go, not just throw him off a bridge?”

Concerned more with the health of their new furry friend, they took the cat to the BluePearl Animal Hospital just outside of the city’s major metropolitan area.

“Turns out nothing was really wrong with it except all of his nails got cut off because of him trying to grasp the asphalt on the road and his back hurt from the fall,” Orlowski said. 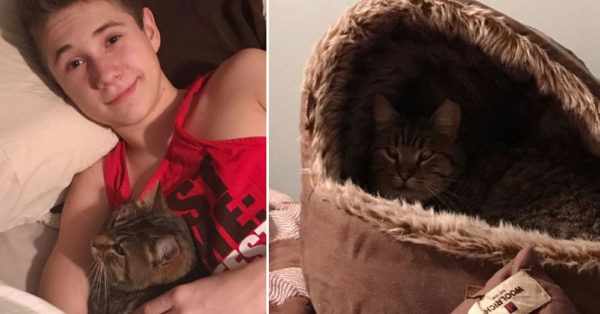 Another ray of light shone through on that gray day as Gavin’s good deed, and the cat’s new lease on life, were both rewarded by a kind follower on Facebook.

“The receptionist walks in and says, ‘Mrs. Brown, we just received a phone call from one of your Facebook friends to cover basically all of the bill,'” Orlowski said.

The cat was named “Lucky” and taken to his new forever home, where Orlowski, Brown, and their dog, Rocko, have been happy to accommodate him.

“I thought of the name ‘Lucky’ because it is lucky to not be hit by a car on the highway,” Orlowski said.

“We saw how attached Gavin was to this cat and the instant bond,” his mother confirmed. “Little Lucky here became a very lucky kitty.”

A petition is gaining signatures in support of a national registry, banning animal abusers from ever harming pets again. Click on the link below to show your support.