A man from Oldham, Greater Manchester, in the UK, is getting a lot of media attention this week after brutalizing his dog and punching it in the face, then throwing it on the ground.

The video that was originally posted to Facebook has been seen more than 2.5 million times, according to the Daily Mail, which also reported the dog’s name as “Narla.”

The video, taken from a smartphone camera, shows the man walking Narla down the street and behind a van, where he begins to assault the animal.

“So earlier this afternoon this disgusting man assaulted his dog! I can’t believe how anyone can even do something like that to their own dog!!” wrote Misha Javed, who originally posted the grisly footage. “I don’t even want to imagine what he would do to the dog indoors. It knocks me sick even thinking about it and I’m hoping the dog is still OK. Please can everyone who lives in Oldham share this post around so we can find out who the actual owner is as he needs to be punished for this cruel act and have his dog taken away from him.” 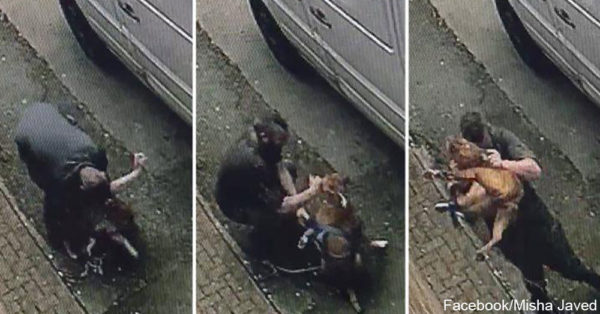 Javed said her brother confronted the man, who dismissed any allegations, then let his dog run ahead, off leash, and began to chase after it.

“We have reported it but please share this as animal cruelty needs to be stopped and he needs to be found,” she wrote.