Wildflower, a beautiful brindle Pit Bull, was saved from “doggy death row” at a shelter, and trained to serve on the police force.

Wildflower was turned in as a stray living on the streets of South Carolina when she was 3-years-old in 2013. Her foster parents were having a difficult time with her since she was so energetic. They reached out to Throw Away Dogs Project. They rescue and train dogs that are then donated to police forces. 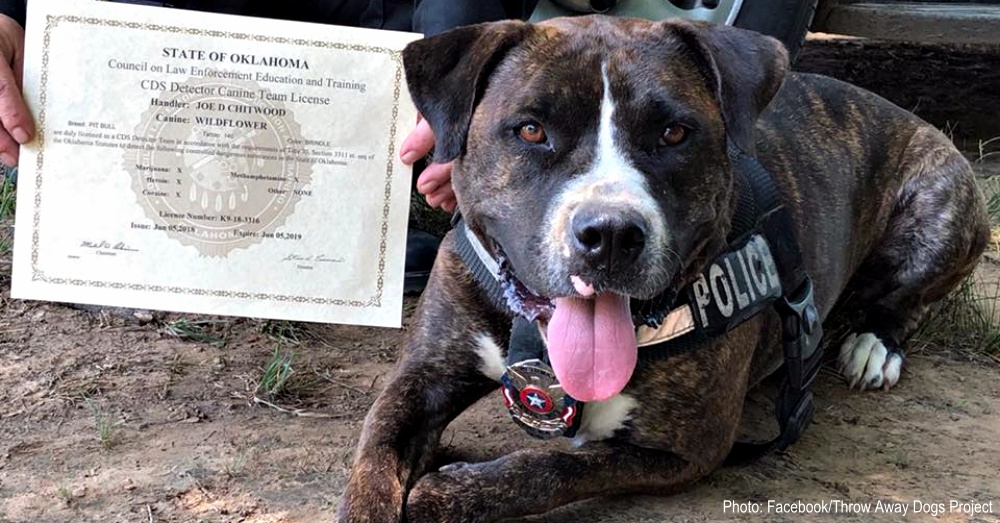 At first, Wildflower had a difficult time with learning the tasks. They were not sure that the dog would be a good fit for the program. However, one day she all of a sudden caught on and excelled at an unbelievable pace.

The organization posted on Facebook, “Wildflower’s success was possible because of our amazing Head Trainer and Partner that never gave up on her and continued to believe in giving this breed a second chance. Thank you Bruce Myers for continuing to use your training methods to accommodate the dogs needs and making it work!”


Wildflower was going to be euthanized. Wetumka Police Department Chief Joe Chitwood told Metro, “All of that good was this close to being put down. But she has a lot more to give, a lot more. Hopefully, you can get some of the negativity away from the breed and show folks that it’s not that way.”

She is Oklahoma’s first rescue Pit Bull police dog. Way to go, Wildflower! She is breaking down barriers for her breed as well as finding narcotics.