That might not be the mindset of everyone in New Zealand, but for at least one man, it’ll do.

When his dark furry friend started acting differently than usual, the man immediately became concerned, Mother Nature Network reports. He took the cat to a veterinarian, picked up a prescription for anti-anxiety medication, and locked the cat in a bedroom for five days to help speed the recovery along.

And then, his cat walked in. 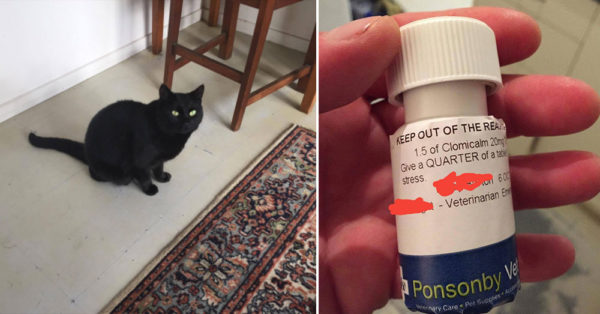 Source: Twitter/Clarke Gayford
The man spent $130 on anti-anxiety medication for a cat he thought was his own.

The man’s actual cat, a female black cat, showed up and made the whole situation very clear—he had been nursing his neighbor’s cat “back to health,” when there was no cause for alarm in the first place.

Just days earlier, the neighbor asked the man if he had seen her male black cat around the neighborhood.

The man said he hadn’t.

And why should he have responded any differently? He had his cat, or at least he thought he did. In reality, both cats were at his house, and, while his was hiding out, he spent $130 on unnecessary medication for a cat that wasn’t his.

An exchange of texts confirmed that there were no hard feelings. 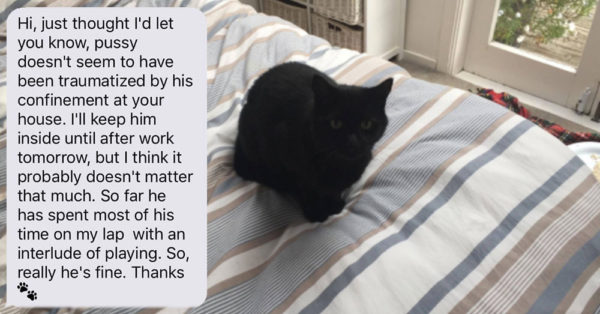 But as the events unfolded on social media, the rest of the world began to take notice of this man’s feline faux pas.

A friend of the neighbor shared the story on Twitter.

a mate spent $130 at vet on his cat then had to lock it in his bedroom for 5 days recovery, and JUST NOW HIS ACTUAL CAT WALKED IN 😂 pic.twitter.com/TyeiFfARJK

OMG so he told vet it did seem to be acting strange so vet prescribed it anti-anxiety meds. MY MATE HAS KIDNAPPED AND BEEN DRUGING A KITTEH! pic.twitter.com/CkbVqWYgiA

And now this from neighbour...... and um well of course your cat is chilled out MY MATE HAS BEEN FEEDING YOUR CAT DRUGS!! pic.twitter.com/vIoJbTLajV

If it’s hard for you to imagine confusing someone you love so much with a friendly neighbor, you’re not alone. There are plenty of people throughout history who’ve had more of a fondness for felines than they have for their fellow man.

Click the button below to learn about Mark Twain’s 19 cats and the lengths he went to keep them happy.


Dog Is Rescued After Being Left On The Side Of The Road And Crammed Into A Tiny Cage: Click “Next” below!