Paris Zarcilla, a film director in London, walked into his room for a sweater, but instead found a mother cat that just had a litter of kittens under his bed. The oddest part was that he didn’t own a cat.

The cat found his room as a safe place to have her four babies. Zarcilla was overcome with emotions upon finding the kittens. He tweeted, “I have run the gamut of human emotion today. Unexpectedly discovered more than kittens but also the hidden depths of my own capacity to love.” 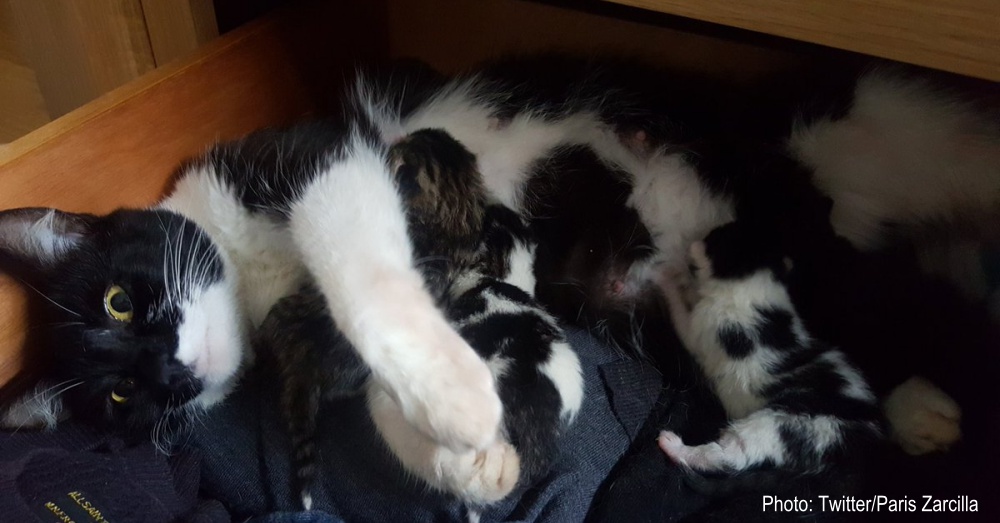 After the shock wore off, he decided to take it in stride and dubbed himself “cat dad”. It didn’t take long for the adorable fur balls to steal his heart. He posted pictures of the kittens and how he is now focusing on his four new children. “To my cat sons and daughters, I’ll be the hero you deserve, but not the one it needs right now (because of mama cat). So I’ll hunt for you, because I can afford it. I’ll be your silent guardian, your watchful protector. Love, #CatDad.”

He reached out to a rescue in the UK, Cats Protection, regarding the care and finding the owner of the mother. The rescue advised him to keep the mother and kittens together for six weeks. He is becoming so attached that they will have a forever home if a chip is not found.

The new kittens have consumed his life and he loves it. He is posting multiple times a day about his love and fascination with the kittens. He has not officially named them because he states that he will be 100% heartbroken if he has to give them up. However, he has posted extensive details about each kitten, including personality and weight.


His writing has been put off due to the adorable kittens distracting him. They are irresistible and impossible to ignore the cute yawns. For now the kittens and mom, dubbed queen, are well taken care of.

Momma cat knew exactly what she was doing. Her instincts were right about having this human help raise her babies.