The Mountain Gorilla is one of the 10 most endangered animals on Earth, and it may not be here much longer.

For decades, mountain gorilla populations have been dwindling as uncontrolled hunting, disease, habitat loss and the ravages of human conflict have taken their toll. The mountain gorilla are now considered endangered.

There is hope for the future of the mountain gorillas, but they continue to face many serious threats including habitat loss, disease, poaching, and civil unrest.

According to the International Gorilla Conservation Programme, the primary threat to mountain gorillas is from the clearance and degradation of their forest habitat. Farmers in the local human population have been stealing land from the park system for for agriculture.

Hunting, trading and consumption of gorillas and other apes is considered illegal in all Congo Basin countries, the World Wide Fund For Nature reports, but poachers continue to kill mountain gorillas with little resistance. There simply aren’t enough wildlife agents to enforce the national and international laws, and few court systems prepared to prosecute the offenders.

Mountain gorillas are being killed for bushmeat, traded throughout west and central Africa, Mongabay reports. Much of this meat goes to urban centers, where eating ape meat is considered prestigious amongst the wealthy elite. It’s difficult to tell how many gorillas are poached because they may be killed and eaten on the spot, or their meat is smoked for later sale in towns.

Human-borne violence is a great threat to mountain gorillas, but disease transmission from humans to primates might drive them back to the brink of extinction, Vice reports.

Gorillas share about 95% of their genetic make up with humans, which makes it easy for diseases to be passed between our species.

The 1994 outbreak in Minkébé (northern Gabon) left nearly every primate dead in what used to be the second largest protected population of gorillas and chimpanzees in the world. According to the World Wide Fund for Nature, between 2002 and 2003 the virus killed many humans and upwards of 570 gorillas in the Republic of Congo. The recent Ebola outbreak in West Africa could have originated from infected bushmeat, as well.

“The most common illness we see in gorillas is respiratory disease, like influenza,” Eddy Kambale, a veterinarian with Gorilla Doctors told VICE News.

Infectious disease accounts for about 20% of gorilla deaths in the wild, which is why tourists who want to see a gorilla in their natural habitat must wear a mask, or risk contributing to more gorilla deaths.

Despite their recent population growth, the mountain gorilla remains threatened and may remain in danger unless action is taken to protect the species. Help us ask the IUCN Red List to reclassify the mountain gorilla as Critically Endangered and draw greater support to the protection of this disappearing species! 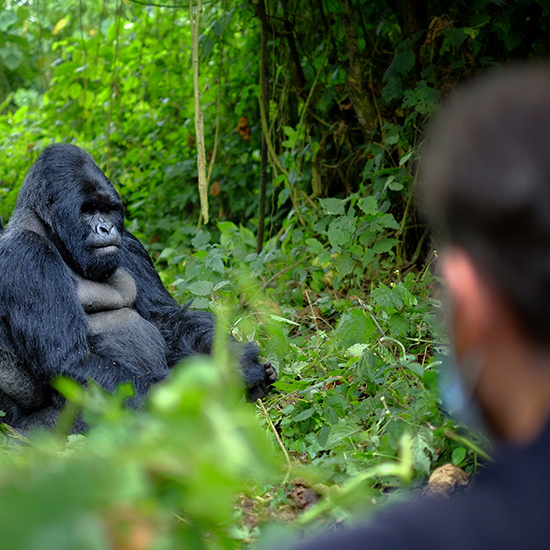 The mountain gorilla still faces great threats, including habitat destruction, poaching, and human-transmitted diseases that could drive the species back to the brink.

Tell the IUCN to reclassify the mountain gorilla as critically endangered!