Imagine coming home from work one day and finding a helpless baby moose on your property, in desperate need of a rescue. As odd as it may sound, this is exactly what happened to Erika Plucas who lives in Lithuania.

“The first sight of her was heartbreaking,” Plucas told The Dodo. “She was starved, dirty, sad, her fur was infested with flies, and she was so terrified of me when she first saw me but was too weak to run away, to even get up.”

The moose’s mother most likely had been killed by hunters and the baby ran off to try to find help. Luckily, the weak, terrified baby had found Plucas.

Plucas carried her inside and called for help but none of his friends offered any guidance. In fact, he was told to let nature take its course. But Plucas wouldn’t listen. He made a call to animal services and while he and the baby moose waited, he gathered what he could to help her.

Animal services arrived the next day but had devastating advice. Since there were no sanctuaries or rescue groups that could take the baby moose, they offered to call hunters to take care of the situation. Plucas knew that meant the unthinkable and refused.

Plucas said, “Since here in Lithuania we do not have a special institution who would take care of wild orphan animals, they called local hunters and asked if they can take her. I knew it meant certain death for her, so I insisted I should keep the baby, and they agreed.”

The kind man named the baby moose, Emma. Caring for her was a challenge, for sure. She had to be fed every few hours. Plucas had to tend to her, and remain at her side because she was afraid of everything but him.

As Emma got bigger, Plucas began reintroducing her to the wild, showing her the ways of the forest and how a grown moose should behave. She didn’t like it at first, but loving Plucas as much as she did, she followed him where ever he went.

The older Emma got, the more confident she had become. Emma would spend more and more time in the forest, even growing bold enough to venture there on her own.

Then one day, when she was ready, Emma became a full-time, wild moose.

Even though her home is in the wild, she still comes to see her dad every day! They go swimming together and Plucas brings her treats.

Plucas worried she would face a similar fate as her mother did so he did something pretty incredible! He spoke to all the hunters in the area.

“I had some hunters over for them to see her as not just a nice, warm steak with potatoes and vegetables on the table, but as a very intelligent and loving animal,” Plucas said. “Some claimed they will put down hunting rifles for good, and some promised never to shoot a moose again.”

Seems that saving one precious life may have saved many more, thanks to a kind man with a big heart. 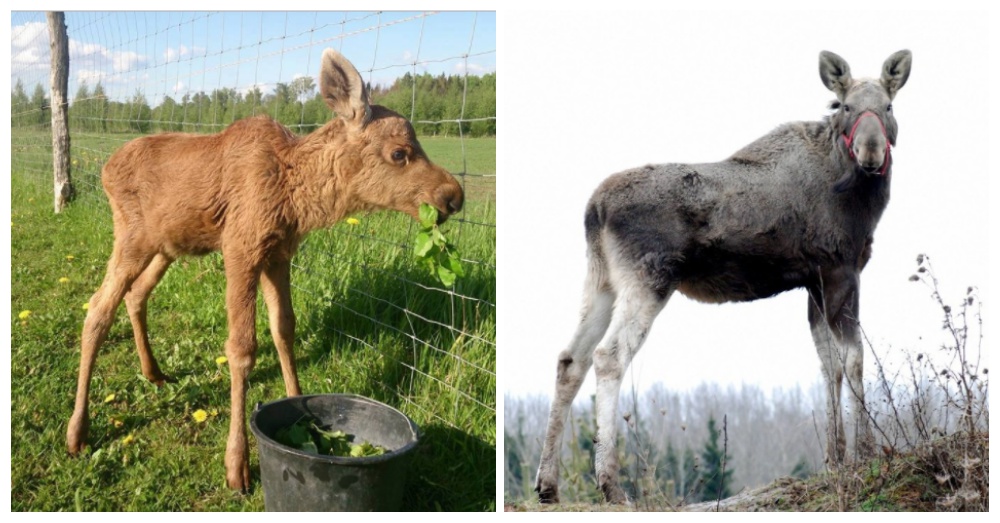