The reality is: auction houses are pretty brutal! There are lots of animals that go through them, many of which are not treated very well. For animal lovers, it’s not an easy sight to see. Especially not for Janice Wolf, the founder of Rocky Ridge Refuge, a beautiful animal sanctuary in Arkansas that provides a safe haven for animals with special needs.

Wolf decided to send a friend to the auction to see if there were any animals she could help… and her friend came back with a baby miniature cow they named Moonpie.

Now that Moonpie has been at the sanctuary for six weeks, she has been having a bit of an identity crisis. She thinks she’s a dog! Because Moonpie is so young and still being bottle-fed, she is living indoors with twelve rescue dogs. Wolf’s dog pack all have special needs or are harder to place.

Wolf told The Dodo: “I don’t have a lot of room here, and it was cold and rainy, and that wasn’t good for a little calf,” Wolf said. “All my heated buildings were occupied with other critters, so that’s how she ended up in my bedroom. I figured it would just be for a few days, but the weather just kept going whacky, so she’s been in there for the last six weeks.”

Moonpie has NO clue she’s not a dog… and I don’t have the heart to tell her she’s not one, do you?

While all the dogs took to Moonpie, one dog in particular, fell in love… A deaf white Bull Terrier named Spackle. Wolf said: “The picture with the white bull terrier — that was Moonpie’s first day here. Spackle loves babies, and immediately became her protector and buddy. She wouldn’t leave that calf’s side. They instantly bonded.”

All the dogs tend to Moonpie. They want to cuddle with her, clean her, and mother her. Moonpie has even house-trained herself by watching the dogs do their business! 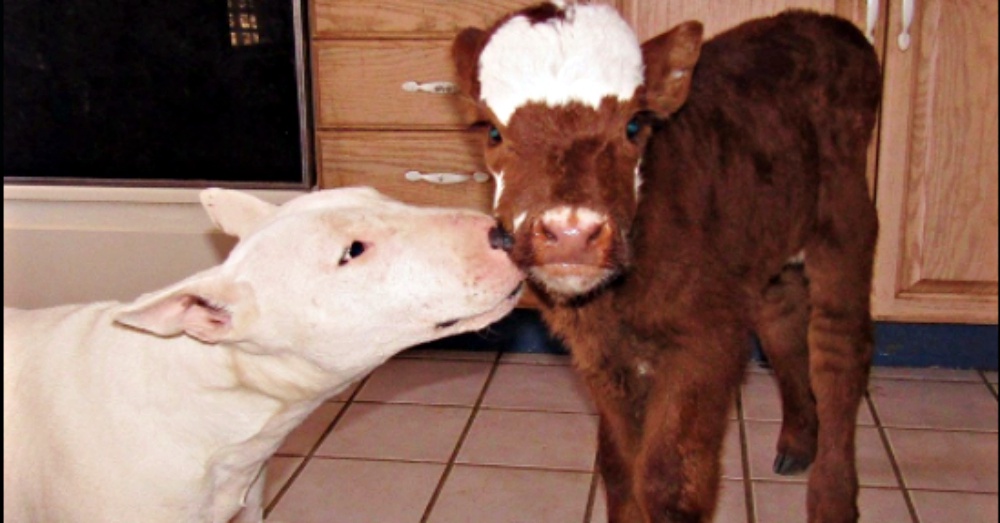 As the weather is starting to warm up a bit, Moonpie is venturing outside more and more. She has now met the other rescue cows. Wolf thinks she’s starting to understand she may not really be a dog. But I’m pretty sure Moonpie will always consider “her first pack” a part of her family.