All too often, the Korean dog meat trade is a source of tragedy and outrage, but newly elected South Korean president Moon Jae-In has brightened a few headlines by adopting a shelter dog rescued from the notorious industry.

Moon brought home Tory, a 4-year-old mixed-breed dog rescued from a dog meat farm by Coexistence of Animal Rights on Earth (CARE) two years ago, the Dodo reports. This is the first time a homeless mixed breed has ever served in such an illustrious position, as well as a strike against the superstition that dogs with dark coats are unlucky.

“I hope that President Moon Jae-In’s adoption of Tory sends a loud message to South Koreans that all dogs are pet dogs,” Korean K9 Rescue director Gina Boehler told The Dodo. “We hope this will be a catalyst for a change in mindset, values and compassion and extends to all dogs — even ‘meat dogs’ or strays.” 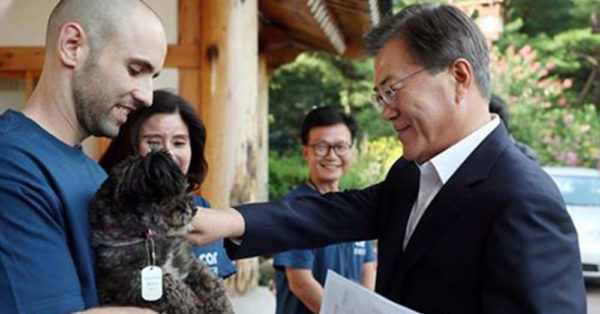 Boehler’s organization finds homes for dogs rescued from the meat trade in a country where dogs are raised and acquired to be consumed without regulation. More than two million dogs throughout Asia are killed for meat every year, but animal advocacy groups and ordinary citizens are slowly turning the tide against such practices.

Tory was delivered to the South Korean president’s home, the Blue House, on Wednesday, July 26. There, he will share the space with a rescued shelter cat named Jjing-jjing and a 10-year-old Pungsan dog named Maru. 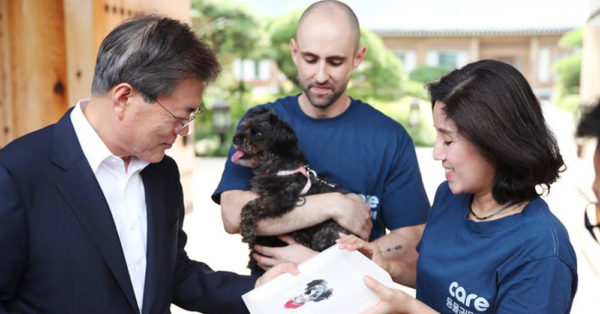 Previous to Tory, the First Dog position was shared by the nine Jindo dogs of Park Geun-hye, who was ousted from leadership following accusations of fraud and abuse of power, CNN reports.

Moon hopes to draw attention to the plight of dogs in the meat trade. His 2017 campaign promises included making South Korea a better place for both humans and animals. He maintains that about a million animals a year find new homes after being rescued from the industry, but nearly a third of them are abandoned.

“We need to pay more attention to abandoned animals and care for them as a society,” the president wrote in a Facebook post. 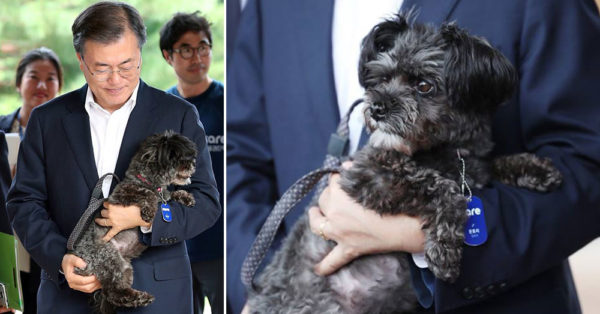 As both the Dodo and CNN have confirmed, almost 800,000 pets were actually abandoned in South Korea in 2015. No matter the number, many people are supportive of the new president’s work toward a more compassionate South Korea so far.

“President Moon Jae-In is very aware of the campaigns around the world to ban the dog meat trade in Korea,” Boehler said. “We believe he will push for change and, in time, it will become illegal to raise dogs for consumption in Korea. He has the power to do it.”

Elsewhere, pressure is mounting on the leadership of Yulin, China, to end its annual dog meat festival. Click the link below to join the fight and save the dogs!