The retired police dog rescued her family of four from a house fire on April 25 in Longwood, Fla. The family was asleep when the fire quickly escalated and trapped them in their home. It was their neighbors who called 911. Chip Dover, his son Andrew, and Joe Jordan were focusing in on Jupiter from a telescope when they saw the house explode.

“We were getting ready to come in when we heard a big explosion, and the house just blew up,” Dover told Today Parents. “We ran over there immediately and it was burning like crazy, and then we realized the family was still inside.”

Neighbor John Newton smashed through the windows at the front of the home with patio furniture and pulled Margo Feaser, a Sheriff’s Investigator, out first. Firefighters arrived shortly after and saved Feaser’s husband Brent after breaking through the front door. 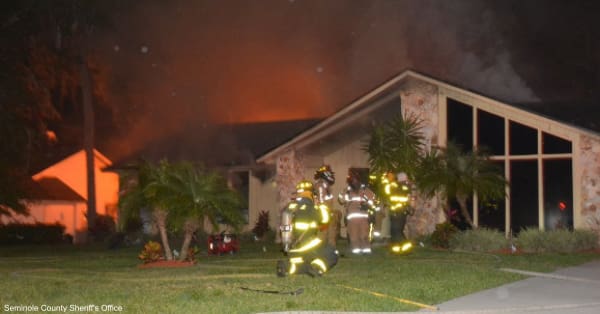 Officers had to hold back Feaser as she desperately tried to get back inside the house to save her two children, a 2-year-old girl and her 4-year-old brother. Meanwhile, the firefighters faced the daunting task of navigating the heavy smoke and fire in the home to find the kids.

It was then that Maxx jumped to action, ran back inside the house and led the rescuers to the children, who were immediately rushed to the hospital.

A Florida fire marshal’s preliminary investigation indicated that the fire started on the back porch by accident. While the home was destroyed, the entire family was saved and is recovering. They were all treated for from smoke inhalation and burns, as was Maxx who is being treated by a local vet. 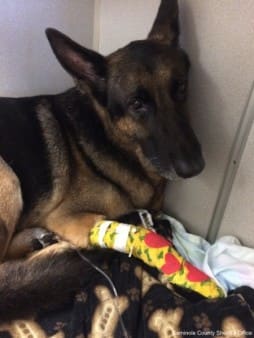 Feaser investigates auto thefts for the Seminole County Sheriff’s Office. She served three years with the U.S. Army, was deployed overseas during Operation Enduring Freedom, and is currently a member of the Army National Guard.

While we don’t hear stories of lifesaving canines like Maxx every day, for many U.S. Veterans with PTSD a loyal friend can mean just as much. Rather than prescribing more pills, the Dog Training Therapy Act provides veterans with alternative care that can be integral to their recovery. Sign here to support a service dog pilot program for veterans coping with PTSD.