Meet Mauka, a pit bull that was forced to fight for the first few years of her life, but transformed into a loyal companion after experiencing love.

She is our spokes-dog for our fifth annual Shelter Bowl, which raises money to provide healthy meals to shelter pets across the United States.

Rescuers from Cedartown Animal Rescue, Education & Sterilization (CARES) helped save 107 dogs from an illegal dogfighting ring. The severely malnourished dogs were living outside on chains and had never known a gentle touch.

However, when rescuers arrived an emaciated pit bull come over wagging her tail – this is the dog they named Mauka. She was covered in wounds from previous fights and in desperate need of nourishing food.

Mauka was taken in by CARES and fed nutritious food as she experienced love for the first time. Shortly after she arrived, she developed a high fever and began vomiting. She was brought to the vet and diagnosed with Babesia. It was treatable but the meds were expensive. The rescue said her life mattered and proceeded with treatment.

Slowly, she started to gain weight and open up. Her personality started to emerge and a year later she finally found a loving forever home. She now lives with six other dogs that she plays with and sleeps in bed with every night.

The shelter was able to provide all the necessary veterinary care because of donations from generous people and from the money they saved by receiving donated pet food. Food is not only vital but one of the largest expenses for a shelter. GreaterGood.org’s Rescue Bank helps fill the gap, ensuring that animals waiting for their forever homes, like Mauka, always have a full belly. 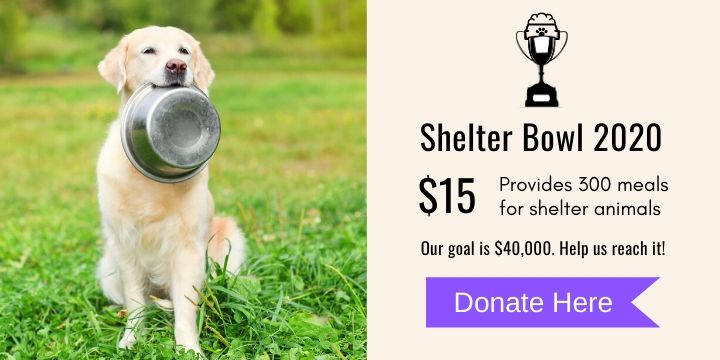 That’s why we created the Shelter Bowl and we need your help to meet our goal of $40,000 to feed pets in need. According to the National Retail Federation, football viewers will spend an estimated $89 per person on food, beverages, and other items for this Sunday’s big game. During this year’s Shelter Bowl, that amount could deliver 1,780 meals to shelter pets in need! Even better? This year, each donation made between January 27th and February 2nd will be matched by Purina®️, up to $40,000 value.

100% of your Gift That Gives More™ donation will go as a charitable gift to GreaterGood.org. GreaterGood stores pay the credit card transaction fee, so every cent of your donation goes to charity. Mauka and thousands of other shelter pets thank you for donating and providing them with healthy food.