The Smith family of Maryland found themselves in just the right place at just the right time to rescue a tiny piglet from certain death in a snowstorm. On their way home from a skiing trip, Perry Smith and his family spotted a small pink object by the side of the road. Despite the hazardous conditions, they stopped to investigate. Winter storm Jonas, which brought blizzard conditions to the Washington, D.C. area, was beginning to pound the Hagerstown, Maryland, roads when Perry Jr. looked out the window and noticed something unusual. It turned out to be a shivering, frostbitten piglet covered with scrapes and bruises. After wrapping the piglet up in a sweatshirt, the family headed for a nearby hotel where they sneaked the poor little guy into their room. 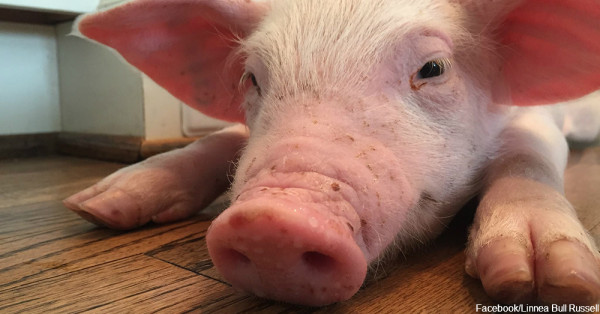 Throughout the night, the family took turns caring for the pig they named “Wee Wee” to return his body temperature to normal. When he seemed well enough to eat, Perry braved the storm again to buy bananas and rice cereal. The Smiths made several calls to find experts who could guide them in caring for Wee Wee, but managed to connect with only one: the owners of Poplar Spring Animal Sanctuary in Poolesville, Maryland.

The Smith children were keen to keep 2-week-old Wee Wee as a pet, but farm animals aren't allowed in their residential area. So Wee Wee found his forever home at Poplar Spring, where he can roam and play without being caged. Quite a turnaround for the little guy who almost certainly landed in the snowdrift after jumping out of an animal transport truck bound for an auction.Poplar Spring's owners say it isn't unusual for livestock to escape the moving trucks, but when they do, they usually don't survive. Because of the Smith family's kindness, Wee Wee is not just not surviving, but thriving in his new home. Luckily for animals everywhere, this rescue mission isn't a one-time-only instance; read more amazing animal rescue stories.