Hope Was Grim For Dog Who Fell Into 20-Foot Manhole, Until A Friend Arrived

A three-year-old dog was trapped in a sewer manhole that was 20-feet deep. The cover was nowhere to be found, so it’s likely that the dog accidentally fell in on his own. The poor pup may have been stuck down there for several days.

Gee, a managing engineer with the Houston Department of Public Works and Engineering, got a call about the trapped dog. A crew rushed to the scene to get him out as quickly and safely as possible.

One of the crewmembers made his way down the sewer and said the dog appeared to be fine, and fed him dog food out of a can. Then they lifted him up out of the manhole. 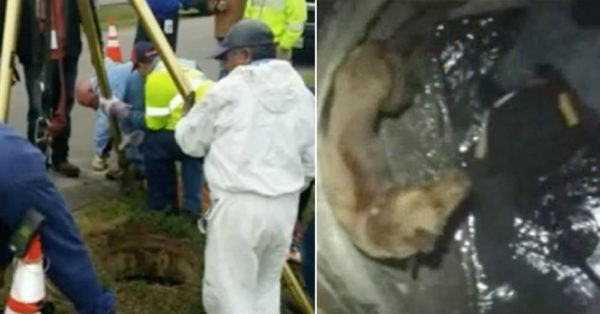 All night Gee thought about the dog and his story and realized that he would make a great mascot for their department. That’s when he decided to adopt him!

They named him Sam and he is now loved by the entire department! Watch more of the story in the video below: