Good Samaritan rushed over to save an overheated Yorkshire Terrier in the backseat of a VW Golf on a sweltering day in Berkshire, UK.

The area is currently experiencing a heatwave with temperatures climbing over 90 degrees, making it the hottest August in 17 years. On one of those smoldering days, a Yorkie was left in the backseat of a parked car with the back window cracked just a couple inches, providing no air flow. The little dog was covered in sweat and desperately trying to get out.

The owner of the vehicle was inside one of the stores and bystanders said the dog was locked in the hot car for at least 40 minutes.

Samantha Heaver, one of the onlookers, said, “Her car was there before we pulled up. The alarm kept going off when we went to currys. Ed looked in and the dog was panting trying to get out of the 2 inches of open window!”

The man overheard Heaver and other bystanders talking about the poor dog and luckily had an ax in his vehicle. He went over to the passenger front window and started swinging. After multiple blows, the window finally shattered and the dog was rescued.

Two police officers were having lunch at a nearby M&S, so the hero went over and told them what he did. They arrived at the scene and one of the officers took the dog to the vet to be examined. The other officer waited for the owner to return.

The owner and a little girl returned to the car 10 minutes later. “She came out of currys with NOTHING so obviously that was essential,” wrote Heaver.

The woman said she was sorry and ‘didn’t think’, but Heaver replied, “would you leave her in the car. She tried to say she had been 20 minutes. More like 45! She’s been reported.”

Heaver recorded the rescue and shared it on Facebook where it went viral. Over 50k people viewed it and were infuriated by the owner’s careless actions.

One viewer commented, “Huge well done for rescuing that poor little dog poor pooch looks so sad 😞 I really hope the owner sees all these comments and I hope he/she will be haunted by this for rest of there lives. Better be prosecuted too!”

Every year, countless dogs are left in hot cars and suffer severe heatstroke or death. Although it’s not illegal to leave a dog in the car in the UK, neglectful owners could be charged with animal cruelty under the Animal Welfare Act 2006, “which carries a potential six-month jail sentence and an unlimited fine,” reports the Metro.

Watch the man, who is now being hailed a hero, rescue the little dog in the video below.

Animals can sustain brain damage or even die in as little as fifteen minutes in a hot car. NEVER leave a dog in a car, even for a ‘quick errand’. Sign the pledge below to spread the knowledge, and to act if you see any animal left alone in an unattended vehicle. 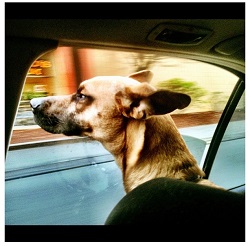 Parked cars are fast-acting deathtraps for dogs: On a 78-degree day, the temperature inside a parked car can soar to between 100 and 120 degrees mere minutes, and on a 90-degree day, the interior temperature can reach as high as 160 degrees in less than 10 minutes.
Our best hope for eliminating this tragic trend is to increase awareness, pledge to spread the knowledge, and to act if you see any animal left alone in an unattended vehicle.
Sign Now!