10 Unexpected Ways To Bond With A Cat

I was around 5 or 6 when I realized — the hard way — that cats and dogs are on different sides of the pet spectrum.

While you could wrestle around with a dog, cats generally prefer their own space.

Of course, that doesn’t mean that cats are unfriendly or antisocial. Just like everyone, cats come with their own unique personalities. Will they be openly willing to do tricks for treats like a dog would? Maybe not. But they can show affection in their own way.

Roughly a decade back, I rescued a stray kitten that was found outside by a college acquaintance. At first, the kitten — whom I named Finn — was a little standoffish and territorial.

In my head, I figured she was just being a cat. But these days, she and I have built up a routine. On the days when my daughter is off at preschool, Finn comes upstairs and hangs out by the windowsill. She knows that it’s her time to bond with me. Obviously, we speak no words. We just know that every other day, it’s our time to hang out — without anyone else getting in the way.

These moments made me realize that it’s really important to bond with your cat. Even little gestures mean a great deal to them. Here are some other fun methods that’ll be beneficial to both of you. Just remember that even if they don’t openly show their appreciation of you the way your dog might, it’s still there.

1. Pet Them While They Eat 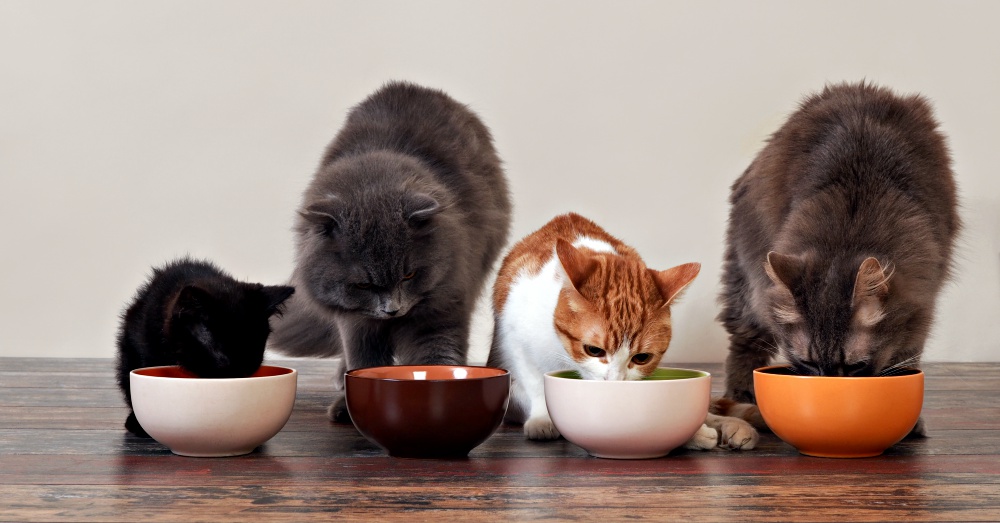 This advice is absolutely different than something you’d tell a dog owner, since territorial dogs may get nasty when someone tries to mess with their dinner routine. Cats, on the other hand, feel safer when you’re around. According to Catster, it’s called “affection eating.” Next time you prepare their dinner, consider hanging around for a few minutes and becoming part of their meal-enjoying experience. 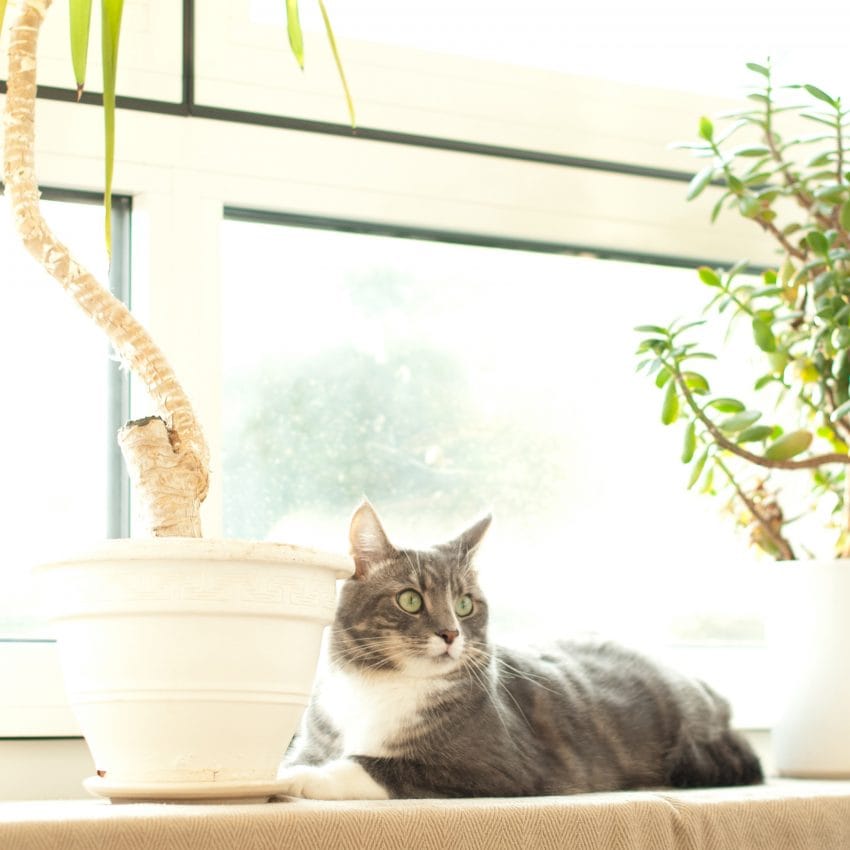 Cats love to watch the world go by. That’s why it’s important for them to have access to a window. Research has shown that cats can spend anywhere between two and five hours staring out the window. So why not join them? You’ll want to give them their physical space — but otherwise, a cat won’t mind if you peacefully spend that special time with them.

3. Recognize When They Need Space 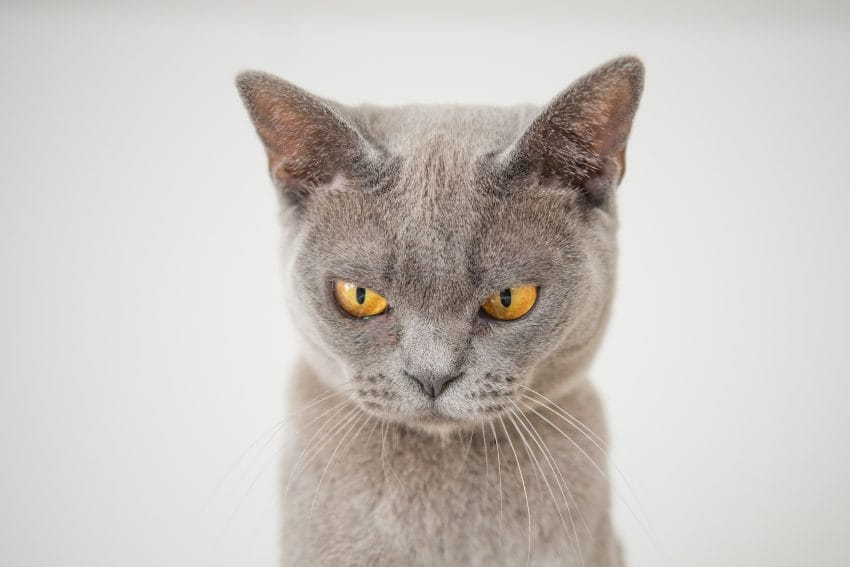 Speaking of physical space, it’s an important issue for cats. Cats are a lot like people. Sometimes, for no particular reason, they want to be left alone. They’ll do a good job of making you aware of their needs by telling you with their body language. If their ears have flattened and their tails are swishing around, that’s cat language for “back off.” By paying attention to how they feel, they’ll appreciate you more when they’re willing to play. 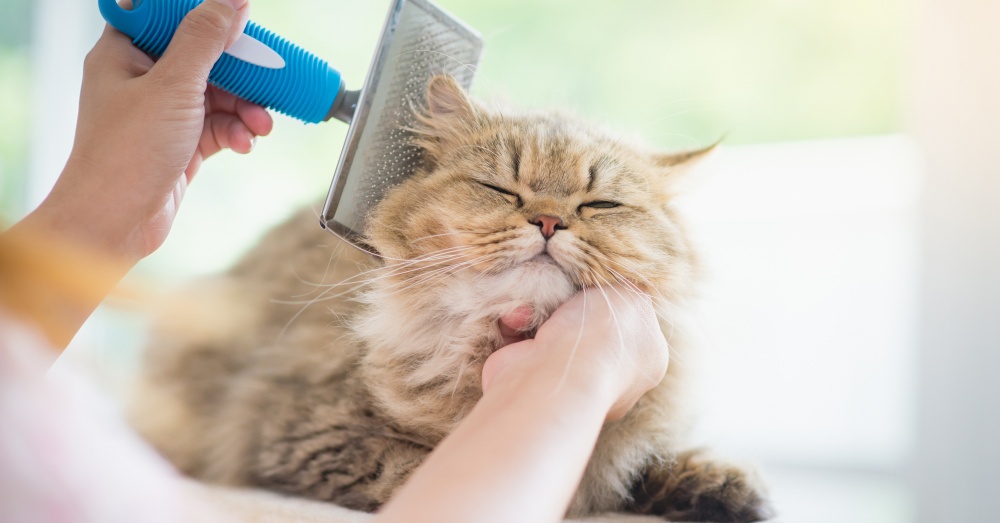 It’s normal to own two cat brushes — one that really gets the job done, and one that your cat is comforted by. By spending some time grooming your cat, they’ll become more willing to be affectionate while also leaving less hair around the house. All you need is about 10 minutes a day, and it can easily become part of your routine.

5. Make Them A Cat Condo 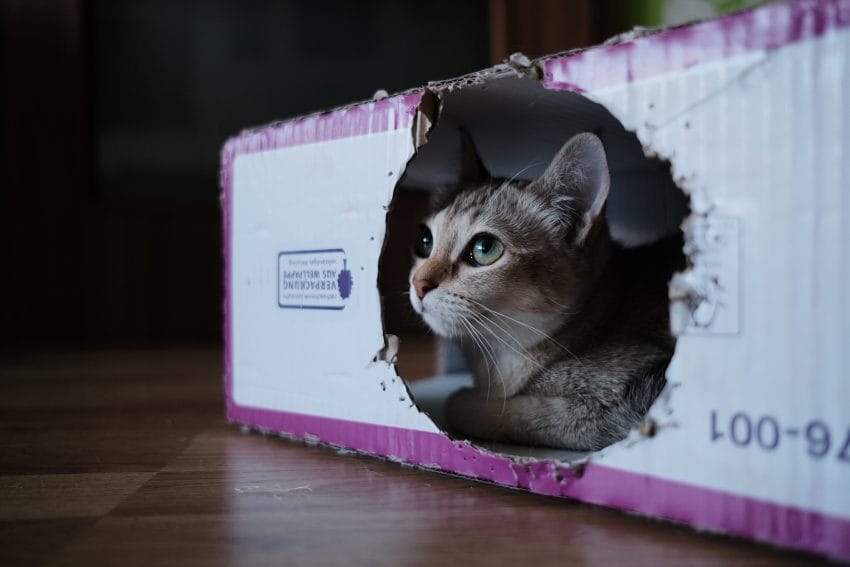 Cats thrive when they have places to climb and hide. But, it can also be a risk to spend a ton of money on something your cat isn’t into. That’s why it can be a great exercise to take some boxes and repurpose them into a fun cat hangout. Just make sure that all boxes are secure since you don’t want to accidentally frighten your cat by building an unsound structure that topples over as soon as your cat jumps in.

6. Let Them Sleep With You 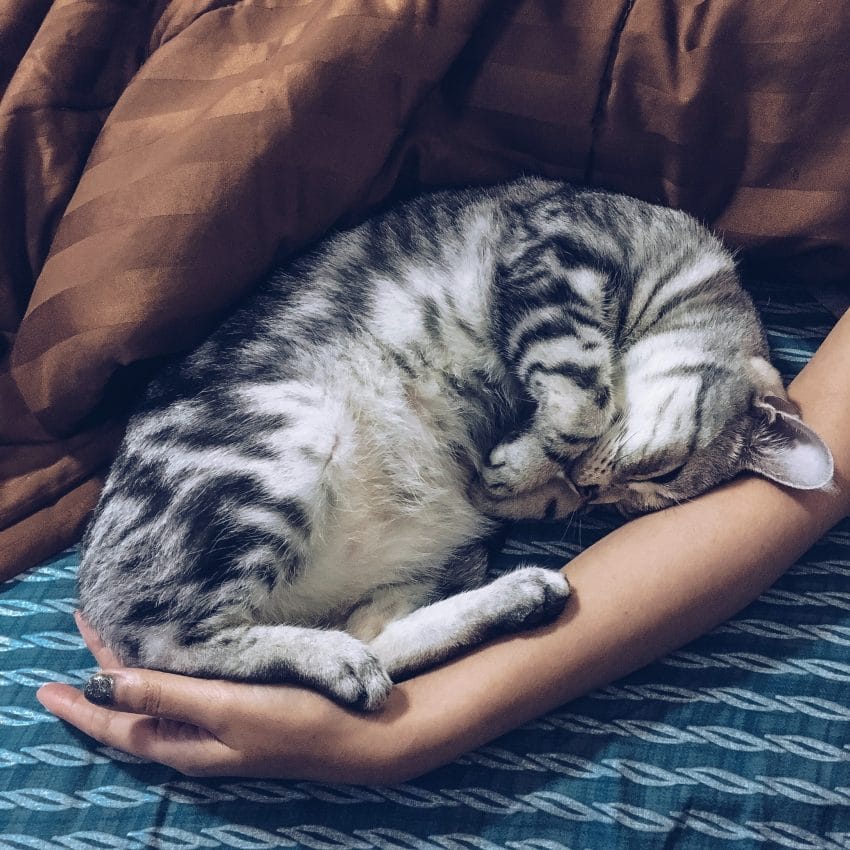 Healthline reports that letting your pet sleep in bed with you can have a lot of benefits. For one, you’re less likely to be stressed out. Just remember that even though this will be beneficial for your bond, cats do keep crazy hours — so, leaving your bedroom door open so they have an easy exit would be your best bet for a good night’s sleep.

7. Give Them The Right Toys 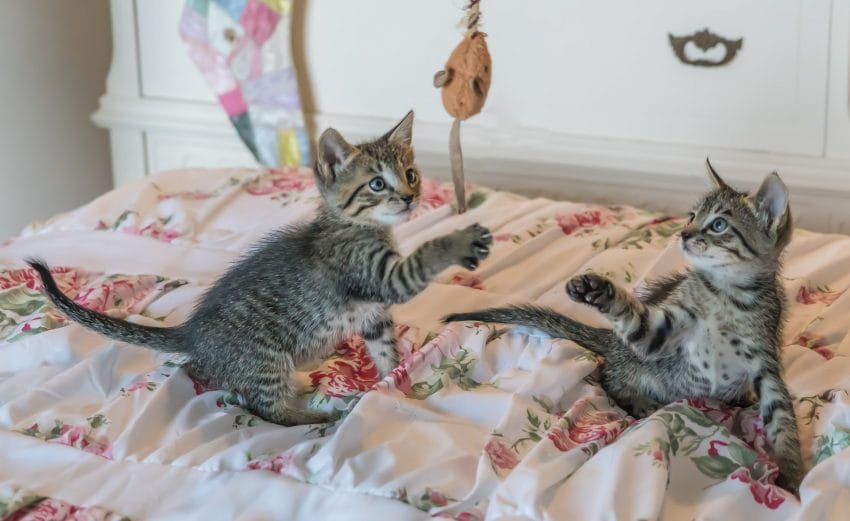 Not every cat will like every toy. It’ll save you a lot of money and frustration to naturally see what kind of play they enjoy. If they enjoy chasing bugs around the house, consider buying a laser pointer. If they enjoy batting at a string, a wand toy can be more engaging. 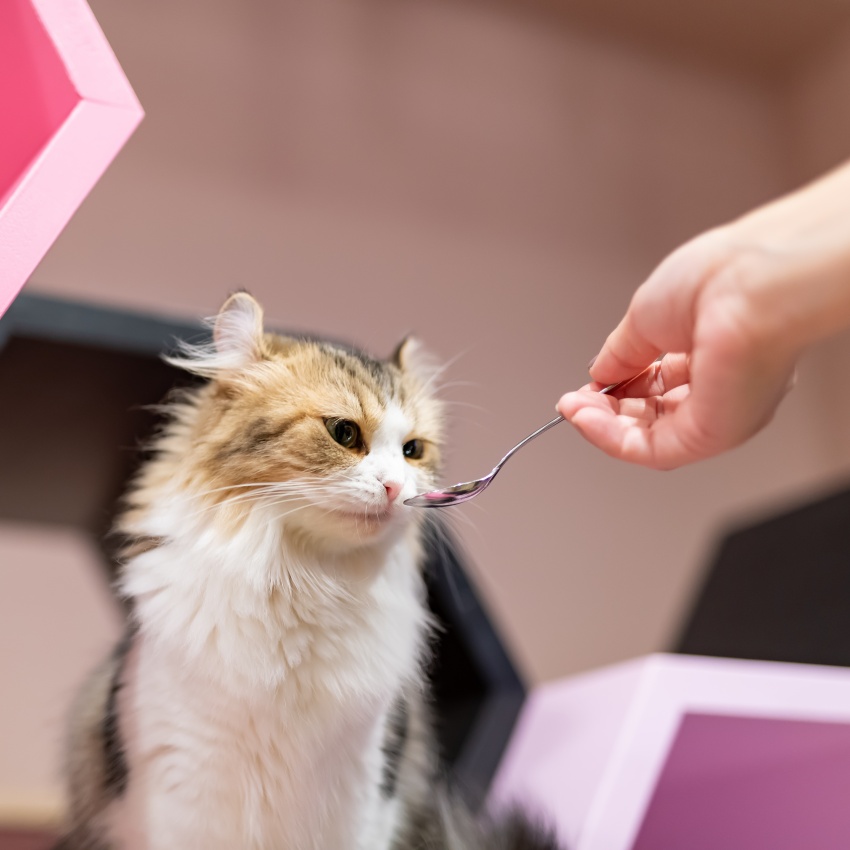 Dogs have a bigger reputation for eating table scraps, but there’s also a bunch of food that’s safe for cats, as well. Just make sure that human food doesn’t replace regular cat food and is only used as a treat. Some of the best options include cooked eggs, lamb, cooked carrots, peas, and canned fish. 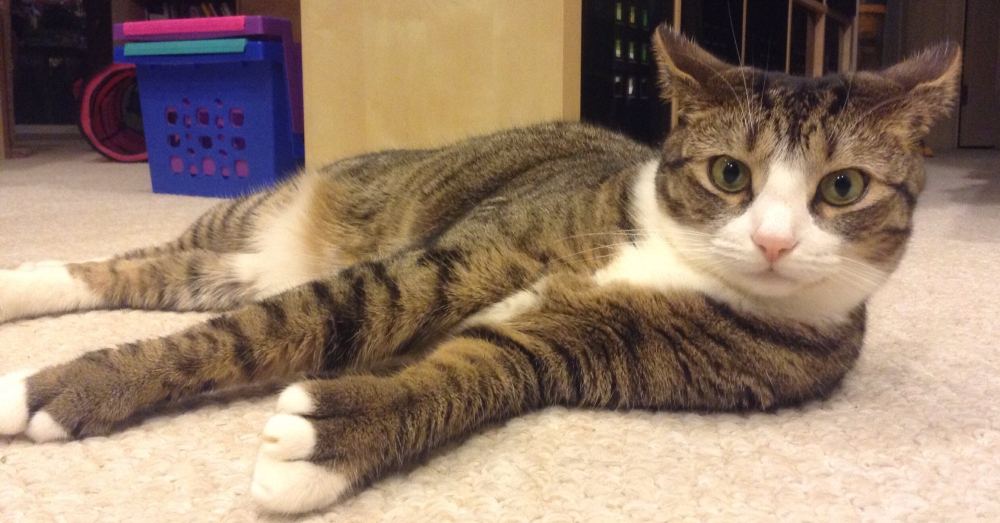 Cats learn who you are — they’re intelligent animals. So, they may be a little standoffish if you’re trying to bond after they’ve only been in the house for a little bit. That means that you’re going to have to work on your second impression.

The Cat Whisperer suggests sitting on the floor near your cat with some treats around. By making this a pattern twice a day for several days, they may change their initial opinion of you and realize you’re fun to hang out with. 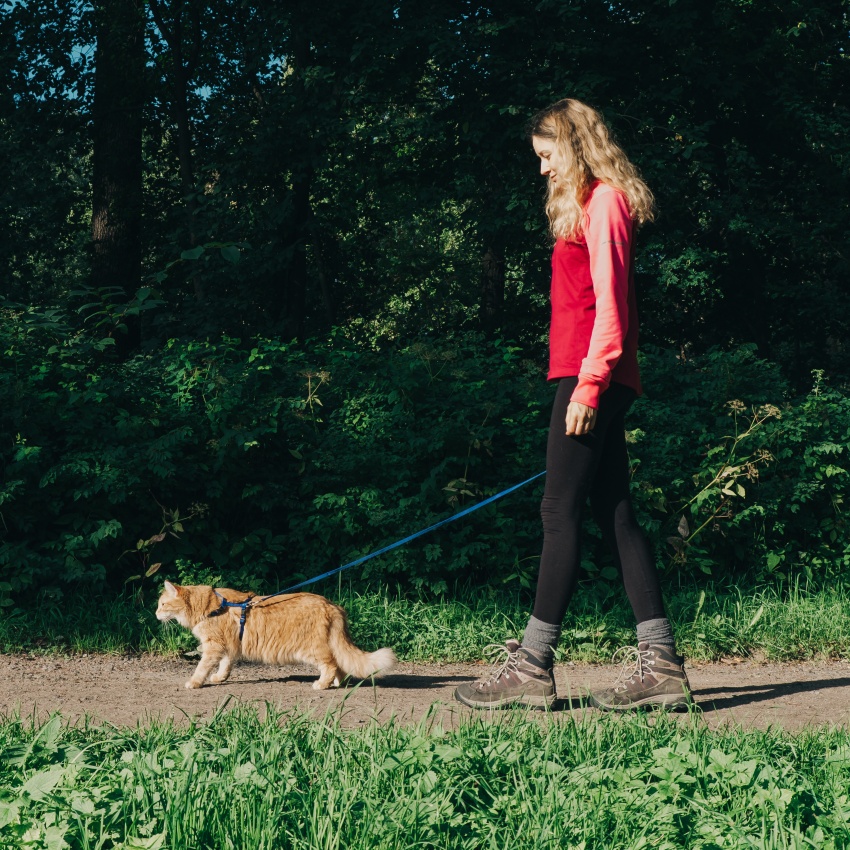 Not all cats will be OK with a leash, so if yours ends up panicking, you can help them explore the outdoors by creating a “catio,” or, a safe outdoor patio for your cat. But if your cat isn’t scared of the leash, or being connected to it, consider going for a stroll instead. A leashed cat will definitely get you some good attention, but it’s also healthy for the two of you to get some steps in together.