You’ve heard that when two people are in love, age is just a number. Well apparently, when two animals are in love, species and size are just… well, unimportant. Such is the case for two very special friends, Abby the feisty dachshund, and Bonedigger, a Barbary lion.

The pair lives in the G.W. Exotic Animal Park in Wynnewood, Oklahoma. Actually, it’s not just the pair of them—Bonedigger lives with four little dachshunds, but Abby is his favorite. The two met when they were about six to nine weeks old and they were instantly inseparable. Though Bonedigger has now grown to such a size that Abby would be just a few scrumptious mouthfuls, Abby is the one who runs the show in the lion cage. “I can’t say that I’ve ever seen anything like this bond,” park manager John Reikene said. “They’re always just loving on each other.”

When John takes the dogs out of Bonedigger’s cage so he can use the weed eater (the dogs take issue with the weed eater so they need to be removed), Bonedigger whines and paces. His heart is broken for the five to ten minutes it takes up to spruce up his cage, but then the doggy-lion reunion is as joyous as if the dogs and big cat had been separated for years! Since he’s not in the wild, it’s vital that Bonedigger have some sort of animal companionship. The dachshund pups make for an especially playful pride, but Abby gets away with the most, and Bonedigger clearly has a special place for her in his heart. We could all learn something from the bond of this very odd couple! 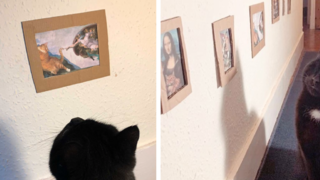