Have you ever watched a dog or cat play with the light from a laser pointer? The animal has a blast and so do his human spectators, but could this harmless game of chase actually pose a threat to a pet’s physical and mental well-being? 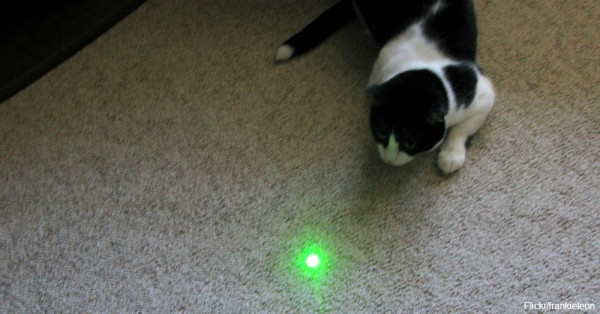 The Benefits of Laser Play

The fast, sporadic movement of a laser light stimulates the hunting instincts within most dogs and cats, resulting in a lively game of chase that often lasts for several minutes. The amount of exercise an animal gets chasing a laser pointer is phenomenal. This is especially beneficial to indoor pets, particularly those without ample outdoor space or who live in cold climates.

Games that allow pets to satisfy their predatorial instincts also provide plenty of mental exercise and stimulation. Regular playtime with games such as these help pets build their confidence levels, according to cat behaviorist, Jackson Galaxy. It gives owners an opportunity to strengthen their relationship with their pet, and the animal gains a sense of routine.

The problem with a light-chasing game is that it’s never over. Regardless of how hard the animal tries, he never, ever catches the light. This lack of closure, satisfaction and triumph creates extreme frustration in some dogs and cats, which may result in a range of behavior problems, as well as mental distress.

The psychological rewards of making the catch and winning the game are just as beneficial to your pet’s overall well-being as the exercise and entertainment value of playing. Repeatedly chasing a beam of light without ever experiencing the satisfaction of catching it makes some animals “loopy,” according to animal behavior expert, Nicholas Dodman.

Light obsession is the most extreme side effect of playing with laser pointers. Dogs and cats with light obsession become preoccupied with catching the elusive light, and often start chasing rays of sun, reflections and shadows. In one extreme case, a dog ruined walls, carpets and furniture inside his owners’ home as he attempted to catch the lights and shadows that hit them. The dog, who played with a laser pointer every day as a puppy, developed behaviors that often resulted in bodily harm, including an open sore that wouldn’t heal on his nose and several broken teeth.

Some light-obsessed pets pounce on other pets or people who step into the path of the light, and others, like the dog just mentioned, smash into floors, walls and other objects. In less extreme instances, a dog or cat may develop other obsessive behaviors, such as excessive grooming in cats. Laser pointers also have the potential to cause eye damage in both dogs and cats if the light beam directly shines in the eye.

What’s Best for Your Pet?

Laser pointers may seem like a convenient way to keep your dog or cat active and entertained, but are the chances of compulsive behaviors, aggression and self-injury really worth the risk? Engage your pet in stimulating games that reward him for his hard work with a tangible “catch.” Teach your dog to play hide-and-seek around the house using favorite toys and treats. Many dogs also enjoy fetching games, pull toys and playing Frisbee.

Cats are often harder to please, but there are a variety of cat toys on the market that cater to a feline’s predatory urges. Wind-up toys provide plenty of exercise while rewarding your cat with a “real” victim. Toys with springs keep cats active in small spaces. If you and your pet still can’t part with the laser pointer, don’t make it a daily habit. Give your dog or cat the satisfaction of winning the laser game by placing treats in random spots around the room and occasionally landing on them with the light.Do you and your pet play with laser pointers? Check out these alternative toys for finicky felines.