The New York Knicks defeated the New Jersey Nets by 14 points on Nov. 9, but the real star of the night was Army veteran Luciano Yulfo.

The former soldier, with over 36 years of military dedication under his Sgt. 1st Class stripes, was presented with a service dog named Murphy at the basketball game. The Golden Retriever was walked out to Yulfo in a surprise ceremony facilitated by the Knicks’ Hoops for Troops program, the Cow Harbor Warriors, Paws of War and Yulfo’s own daughter, Sonia.

Yulfo, who was seriously injured in Afghanistan, had been waiting for a service dog for 18 months before he was invited to the basketball game.

In a tearful moment of joy, a member of the Cow Harbor Warriors, a nonprofit dedicated to “honoring and enabling” veterans of wars in Iraq and Afghanistan, brought Murphy out onto the court where he met his new companion. 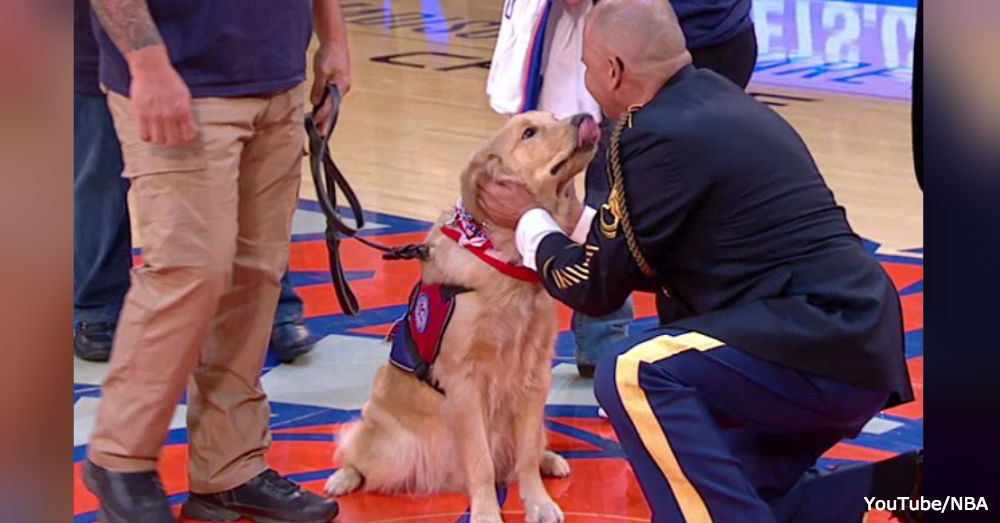 “I was crying,” Sonia Yulfo told Inside Edition. “He just thought we were going to the game and that he was going to be recognized for his service.”

Murphy was initially rescued and trained by Paws of War, a organization that matches rescued dogs with military veterans, often with their own injurious pasts. The program trains and places shelter dogs to US military veterans that suffer from PTSD, bringing them a new sense of independence.

As Murphy and Yulfo exemplify the wonderful partnerships that are possible between veterans and dogs, we wish to advocate for more. Veterans coming home with traumatic brain injury or post-traumatic stress issues face an entirely new battle. The VA’s U.S. Veteran Service Dog Program covers the cost of service dogs only in cases of physical disability. Dogs for mobility, hearing, or sight are covered, but psychiatric issues like PTSD are not. The VA claims that there is not enough evidence to show that the dogs were efficacious despite countless studies to the contrary.