When K9 police officer Matthew Hickey of Marietta, Ohio, retired in January 2016, he expected he would get to take his faithful partner, a German shepherd named Ajax, with him. Hickey had put in 34 years on the force, four of them with Ajax, and he didn't want to be separated from his buddy. However, the state of Ohio had other ideas.The city of Marietta was technically Ajax's owner. Hickey thought that meant the process for him to acquire Ajax was simple. He would pay the city for the dog, and the two would retire together. After all, Ajax had already been living with Hickey for several years, so this would make official an arrangement that was already effectively in place. 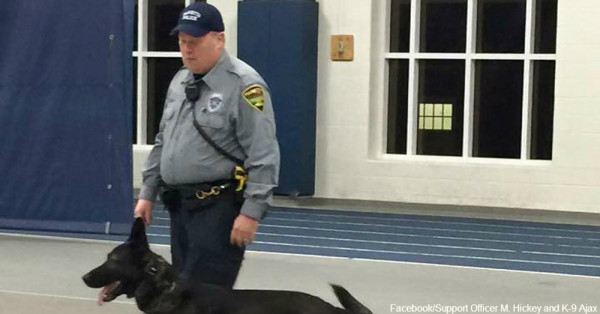 Hickey did some research into Ajax's monetary value and learned from a police trainer that the dog was worth $3,500. So Hickey raised the money and prepared to complete the purchase.

The mayor of Marietta, Joe Matthews, wanted to sell Ajax to Hickey. So did Marietta police chief Robert Hupp. But their hands were tied by state law. In Ohio, if a city wants to sell a piece of property worth more than $1,000, it can only do so at an auction, with the highest bidder claiming the property. Once an expert determined that Ajax still had several years of service left in him, he had to go to auction.

Everyone involved tried to find a way around this requirement, since a trained police dog like Ajax could easily be snapped up at auction by a buyer willing to pay far more than the $3,500 Hickey had pulled together. Hickey learned of a law that said that if a K9 unit was being disbanded, the dog's handler could buy the dog for $1.

Here, however, Hickey ran into a disagreement regarding the interpretation of that law. He thought that he and Ajax formed a K9 unit, and since he was retiring, the unit was being disbanded. However, the city's law director disagreed. He pointed out that the city of Marietta still had one intact K9 cop-and-dog team, and therefore the K9 unit wasn't being disbanded.

The mayor offered another option. If Hickey agreed to continue serving as an “auxiliary officer,” he'd still be employed as a cop, and he could keep Ajax. However, Hickey was retiring due to health reasons and had no choice but to decline the offer.

When the people of Marietta learned what was happening, thousands of people came to Hickey's defense. Pleas on Facebook to contact city officials on Hickey's behalf went viral, and a GoFundMe campaign raised more than $70,000 to help Hickey buy Ajax in a sealed bid at auction. The news about Hickey's plight spread across the nation, with people all over the country expressing their outrage by making donations to help Ajax stay with his beloved owner.

Under all the pressure, the city's law director changed his opinion. He agreed with the interpretation that Hickey and Ajax formed a K9 unit under the law. Since Hickey was retiring, the unit was indeed disbanded, and Hickey was allowed to buy Ajax for $1.

Hickey, who said he was “speechless” at the way people rallied to his cause, was now left with donations of $70,000 that he no longer needed. Instead of keeping the money himself, he passed his good fortune along, donating all the money raised to Vested Interest, an organization that provides bulletproof body armor for police dogs.Police dogs are smart and devoted, and they required a lot of training. However, many of them come from humble circumstances. Just take a look at some of these other police dogs that started out as shelter dogs before finding their true calling.