These are top dogs.

Service K9s Matty, Fieldy, Bond, and Isky were honored with the highest honor for military dogs in the United States, the K9 Medal of Courage.

The medal was designed by philanthropist and veterans advocate Lois Pope and the American Humane Society, and is awarded to military dogs who show extraordinary valor and service.

“These remarkable dogs work side-by-side with the men and women of our Armed Forces, performing vitally important and life-saving work, while putting their own lives on the line for our country,” Pope said.

Joined @AmericanHumane as it awarded the K9 Medal of Courage 2 #MilitaryDogs that helped our troops serving overseas pic.twitter.com/6ns3yp3fZZ

Matty, a Czech German Shepherd, was skilled at uncovering the buried improvised explosive devices that threatened his company while working in Afghanistan. Retired Army Specialist Brent Grommet said his entire unit owes their lives several times over to Matty, who now helps Grommet work through PTSD in civilian life.

“Matty and Brent were driving in a truck that was hit by two roadside bombs. They were flown back to the United States for treatment. Although Brent had already filled out adoption paperwork, while he was having neurosurgery, Matty was wrongly given to someone else,” the American Humane Association reported. “The two friends lost track of each other. Soldier and dog were separated but they never stopped seeking each other out – and finally, with the help of American Humane, these two faithful Battle Buddies were brought back together.” 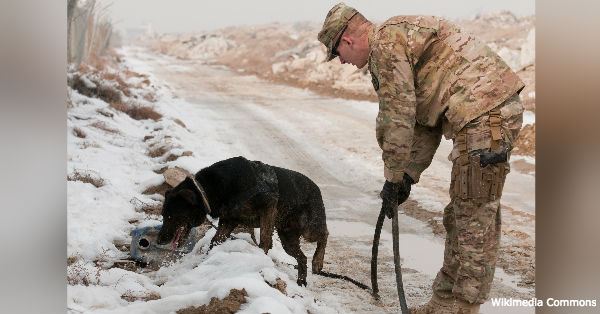 Fieldy, a black Labrador, also tracked IEDs in Afghanistan. After four tours overseas, Fieldy now lives with U.S. Marine Corps Corporal Nick Caceres, where he fills a crucial role as Caceres’ emotional support. Finding and disarming countless explosives can take an incredible mental toll on humans and the animals who sense the tension and see the repercussions of war. The story played out no differently for Caceres and Fieldy, but fortunately the two now have each other for comfort.

“Soldiers have been relying on these four-footed comrades-in-arms since the beginning of organized warfare and today military dogs are more important than ever in keeping our service men and women safe,” said American Humane President and CEO Dr. Robin Ganzert. “At American Humane, which has been working with the U.S. military and military animals for 100 years, we feel it is time to recognize and honor the extraordinary feats and acts of devotion these heroic animals perform every day.”

Belgian Malinois Bond and his handler left the service with more than just respect after over 50 combat missions and multiple deployments to Afghanistan. Bond served as a multi-purpose dog in his Special Operations unit, and while the anxiety of bomb detecting is a little easier to manage now that he’s returned to the states, he now has an even more important job as a support dog.

Isky’s service career stretched well beyond finding IEDs in Afghanistan. The German shepherd worked with handler U.S. Army Sargent Wess Brown as a guard for four-star American generals and diplomats. Isky was injured in combat and his leg was amputated but he continues to serve proudly as Brown’s service dog. 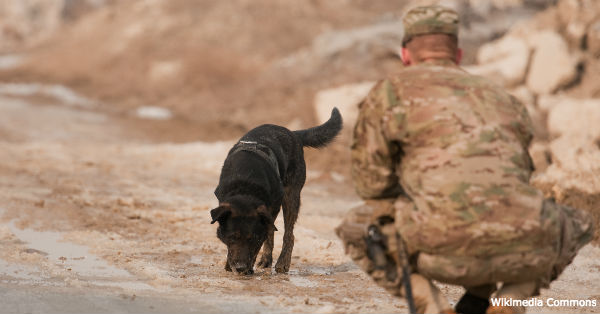 “It is important to recognize and honor the remarkable accomplishments and valor of these courageous canines,” said Rep. Gus Bilirakis, co-chair of the Congressional Humane Bond Caucus. “By helping locate enemy positions, engage the enemy, and sniff out deadly IEDs and hidden weapons, military dogs have saved countless lives in the fight for freedom.”

General Robert B. Neller, Commandant of the U.S. Marine Corps., First Sgt. Matt Eversmann (Ret.) — hero of the Battle of Mogadishu and Black Hawk Down fame — and USMC Col. Scott Campbell, Commanding Officer of the Wounded Warrior Regiment in Quantico, VA, placed the medals upon the dogs at Capitol Hill on July 13.

Service dogs can help veterans who struggle with physical or mental disabilities, but training them can be a difficult task. Follow this link to read about one former Marine K9 handler who is using his expertise to help place service dogs with the veterans who need them.