It was February 24, 2022, when Ukraine was invaded by Russia. Less than 3 weeks later, Veterinarian Dr. Jon Geller arrived at the border, ready and able to help.

“I just had this obsession that I needed to do something and I think other people felt the same way,” Dr. Geller told GreaterGood.

Geller learned that many refugees were trying to cross the border with their pets. Some Ukrainians who couldn’t drive themselves were forced to leave their pets behind because they were too large to bring on a bus.

Animal rescue volunteers had been working to get pets left behind out of harm’s way and into Ukrainian shelters. That became more difficult when Poland, Romania and Moldova closed their borders to pets who didn’t have their owners with them.

Seeing the need for help, Geller Googled veterinarians along the Romania/Ukraine border and located one in Isaccea, a small town where many refugees had been making their way out of Ukraine. One of the veterinarians in Isaccea said help was welcome.

“We don’t really have a plan, he said. Come on over here. We’ll figure something out,” Geller says.

And just like that, SDCI: Operation Ukraine was underway.

The first location of the Street Dog Coalition clinic proved fortuitous. The veterinarian Geller had been in contact with in Romania was neighbors with the man who ran the border station. That made it easier to set the clinic up and start helping people while meeting Romanian regulations.

“We were then able to issue pet passports for the European Union, which allowed refugees to continue traveling to Europe, otherwise they would have been been stuck in Romania or even in Ukraine,” Geller says.

Geller spent 12 days in Romania. He stayed in a church hostel in a nearby village with members of other volunteer groups and medical teams. He recalls seeing Ukrainian refugees in the hostel as well, all women, children and older men who had left fathers, brothers and sons behind.

Every day, Geller would eat breakfast and make the 10 mile trek to the Danube River bringing suitcases of supplies to the vet clinic tent. The team would work from 9 in the morning, just after the first ferry came over, to about 10 o’clock at night.

“We had a stainless steel treatment table set up and a little office, a couple of chairs for a waiting room,” he says.

War zones were a new experience for Geller and his team. Along with the looming threat of military force, their work was complicated by communication barriers, but they came prepared for that challenge.

“We translated our intake forms that we use in the US into Ukrainian ahead of time so folks could fill them out,” he says. “We did have help with some translators.”

Through one of those translators, Geller met a man struggling to leave Ukraine with his dog.

“The first person I met was this older Ukrainian gentleman that that was leaving in his van with a large German Shepherd type dog, a Malinois,” Geller says. “It was him and his dog against the world.”

The man had been working on a Russian fishing boat, had no cash and only Russian credit cards, which were useless because banks outside of Russia wouldn’t accept them. He was out of gas and stuck in Ukraine, while his family was in Western Europe, trying desperately to get out.

Geller says one of the animal nonprofits working at border was able to come up with a few hundred dollars to help him.

“Then he actually ran out of money and gas again,” he says. “Somehow one of the vet students, their mother was able to get him more money, and he finally made it to France where he was going. That was a story with a good ending.”

Most of the people and pets who Geller’s team saw to “were pretty healthy,” Geller says. “This wasn’t a war zone. And that Southwest corner of Ukraine has not been under attack. So it wasn’t like we were seeing pets that had trauma. But the people were traumatized because they were having to leave their country with all their stuff and their kids.”

Working at the clinic meant bearing the cold wind howling across the Danube. For Geller, long underwear and a big scarf were part of the uniform, but for thousands of Ukrainians ferried across the river on a big flat open platform, the elements were less forgiving.

“The cats and the dogs and everybody was just kind of shell shocked, even though they hadn’t necessarily been in a war zone,” Geller says. “They were so grateful. That’s what made us feel really good that we had done this because they didn’t want to leave their pets behind. They’d already gone to the trouble of bringing them all the way, driving for hours to cross the river. It was great, and we were able to take care of any problems they had.”

In many ways the work is completely different from what Geller’s team was familiar with in the states. The Street Dog Coalition’s mission remains thee same: help animals in need.

“In the US, we look at [stray dogs] as pets that are living on the streets, whether unsheltered or with owners,” Geller says. “In other countries many stray dogs don’t have owners. When we were looking at an international opportunity, we had to change our perspective.”

The clinic has been helping an average of 15 to 20 pets a day. Each animal is run through a complete physical exam, microchipped and vaccinated for rabies, documented on the official log sheet, and provided a European Union pet passport so they can travel safely.

The nearest major city to Isaccea is Odessa, the third largest city in Ukraine. Odessa had gone largely unscathed until Russian missiles targeted the city in mid-April. During the resulting lock-down orders that followed, the clinic saw few animals come through. As soon as the orders were lifted, a large influx of refugees and pets would come through.

“We were kind of in waiting mode, waiting to see what’s going to happen, knowing that anything could happen. There could be a ceasefire tomorrow and we would be done or Odessa could come under attack.”

Geller returned to the U.S. on March 28, and has since continued to help run the clinic, connecting with the U.S. veterinary volunteers, vet students and technicians. He has also been paying close attention to the military presence in the area, planning out the safest times to fly over more people and supplies.

“I’ve been deferring to other vets and having fun doing logistics from here,” Geller says. “Right now we feel like we have a pretty smoothly operating little clinic there and we will continue to do it as long as we have to,” he says.

“Maybe I should have taken advantage of being over there to so some traveling,” he adds. “Some of the other veterinarians have gone there and added on to their trip, because it is a beautiful part of the world.”

“They’ve been very enthusiastic and picked up on it quickly,” Geller says. “Since then, it’s mostly been U.S. folks. We have had vet students from all over the U.S., primarily veterinarians, but also veterinary technicians that come and go. There have been hiccups, lost luggage, people having trouble getting there. But it all works out. They turned us loose and they come down to check on us every so often.”

GreaterGood is now working with Geller on getting supplies to the clinic. There are yet many injured dogs in the Ukraine that need care, and Ukrainian veterinarians need help helping them.

That’s the issue right now within Ukraine,” Geller says. “Getting these pets out that were left behind, and getting stray dogs that are in war zones.” 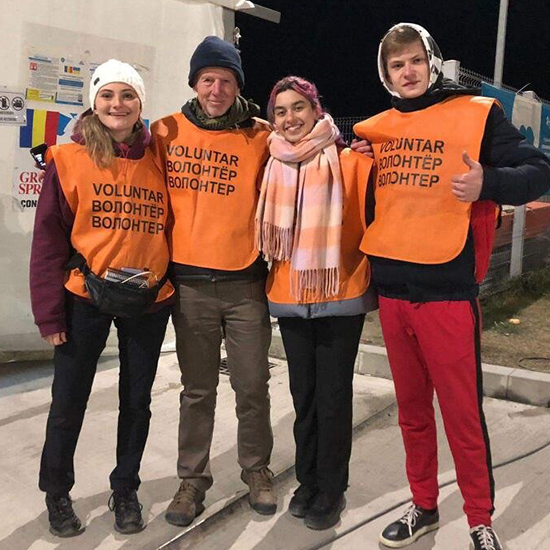 Many civilians who escaped Ukraine had to leave their beloved pets behind. Those surviving pets end up in overpopulated shelters, unable to receive the care they need.

Thanks to the incredible support from our community of donors, the first batch of pet food is heading into Ukraine, but there are still many more pets that need your help!

Click below to see how how your donations are being put to good use In supporting relief in Ukraine!