Jessica Lewis was trying to escape the path of Hurricane Irma. Standing in her way was Dr. Joshua Kennedy’s lecture on political epistemologies at Georgia Southern University.

Obviously, not a class to miss.

Making matters difficult was the fact that Lewis had her dog, Luna, with her, Bored Panda reports. They were both headed to Atlanta as soon as class was out to avoid the storm. But where would Luna stay during the lecture?

Being the bright student she is, Lewis came up with a foolproof plan: send pictures of her cute dog to the assistant professor and try and melt his cold heart.

“Dr. Kennedy, my name is Jessica Lewis,” she wrote in an email. “I realize the answer to this is probably no, but I thought that you might actually be a cool enough professor to say yes, and so I figured it was worth a shot. Can I bring my dog to class today?”

As it turns out, the plan worked. Kennedy’s heart was not so cold after all.

“Did you think calling me ‘cool’ would get me to say yes?” Dr. Kennedy wrote. “Because it won’t work. What will work is that she’s obviously a good girl so of course you can bring her.”

Luna got a tour of the campus and even learned a few things about ideological differences.

“He loved having her and had no complaints at all,” Jessica told the Dodo. 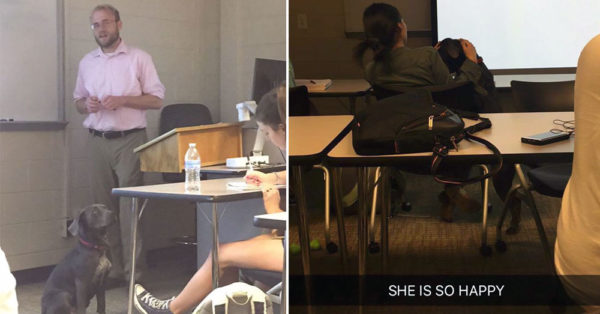 “He was wonderful about it. She was pretty well-behaved in class,” she continued.