As If The Sight Of Their Burned Down Home Wasn’t Enough, What These Two Men Saw Next Made Them Weep

Santa Rosa is smoldering, burned to the ground, and many families of Sonoma County have been left without homes. Some have lost pets, and some have even lost their own lives.

One of those families, the Weavers, were driven from their home as the blaze quickly engulfed everything in its path, the Washington Post reports. But in the hurry to escape, their 9-year-old Bernese Mountain Dog, Izzy, made a dash for it.

Izzy ran away, and the fire made it impossible for the Weavers to stay and look for their dog. 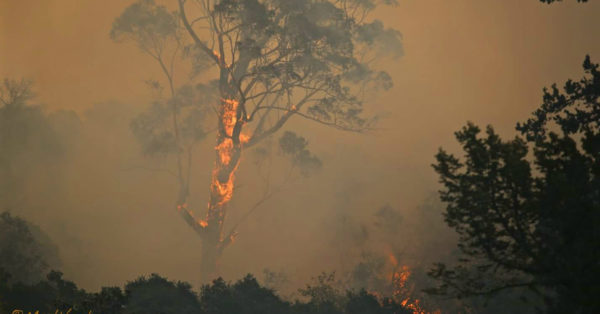 “My mom couldn’t chase after her without risking her own life,” the Weavers’ daughter, Beckyjean Widen, wrote on Facebook. “They had to drive through walls of flames and across a burning wooden bridge to get to Mark West Springs Road and to safety.”

The Weavers lost everything and feared Izzy was dead. 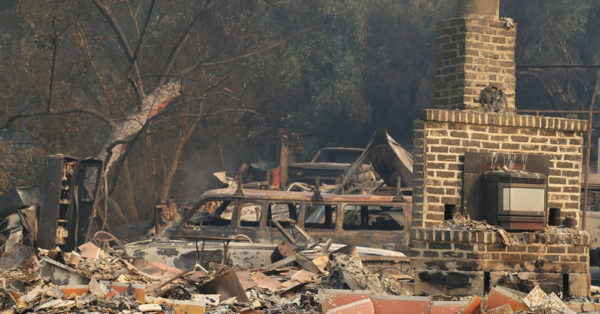 Source: Mark Vogler
A home that was destroyed in the fires.

Widen’s brother, Jack Weaver, and husband, Patrick Widen, made an attempt to return home and were met by police.

“But if you know my brother Jack or husband Patrick…neither one likes to be told no,” Widen wrote. “They ended up hiking just under 3 miles to my parents’ property.” 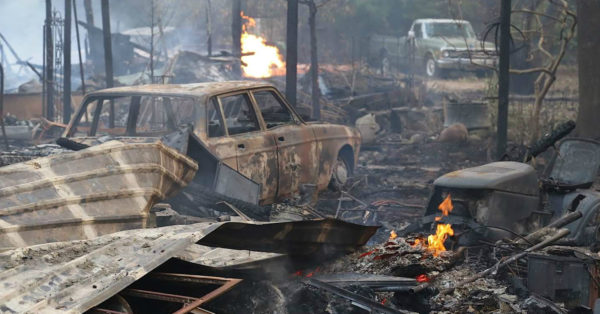 The video Widen posted to Facebook shows the final stretch of their hike.

“I can see the vineyards,” Weaver says as he nears his home, hoping to find Izzy alive. “The anticipation is killing me.” 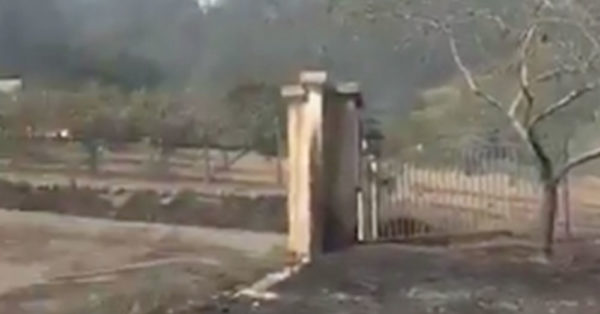 All that remains of the Weavers’ house is a wall standing among ashes and rubble. A tractor and some vineyards managed to survive unscathed.

Then Weaver makes his way up the driveway and notices some movement in the trees. 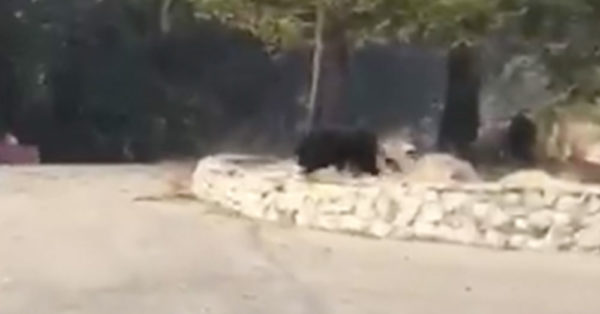 Widen can be heard in the background, overcome with emotion. 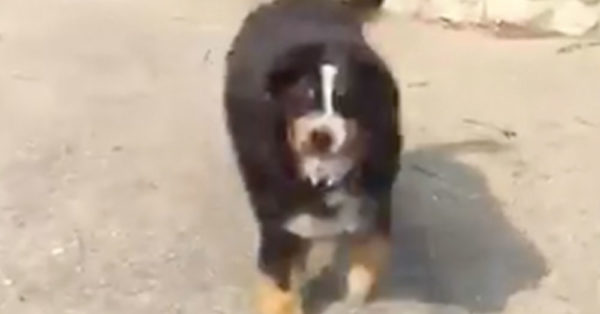 “She was very happy to see us,” Weaver told the Associated Press. “She’s such a brave dog.”

After the men found a cell phone, they were able to call Weaver’s mother.

“She just lost it,” Weaver told the AP. “She went from being devastated about losing her home to being the happiest person I’ve ever seen. I couldn’t get home fast enough. She was really, really happy…. She’s still shaken up by the whole thing, but she’s in much better spirits now that Izzy is at our house.”

Just a heartwarming story to share in the middle of all this devastation. My parents woke up with flames surrounding their house in wikiup bridgeway and had seconds to get out. In the chaos of trying to escape, my parent’s dog Izzy ran from them. My mom couldn’t chase after her without risking her own life.
They had to drive through walls of flames and across a burning wooden bridge to get to mark west springs road and to safety. They lost everything, but my mom was most devastated about leaving Izzy. My brother and husband were determined to try to get back to my parents property to see if by some miracle Izzy survived. They were turned away by police officers, but if you know my brother Jack or husband Patrick…neither one likes to be told no. They ended up hiking just under 3 miles to my parent’s property. This video shows the last part of their hike up to my parent’s house. It’s a little long, but the ending is worth the watch.

Izzy has always had a special place in the family. Having gone through cancer twice, Widen told Today, and now a California wildfire, her story is truly remarkable.

Izzy is safe, but there are still many more in great peril. California officials have ordered an entire city to evacuate due to worsening conditions that have killed 40 people in the largest fire in state history. We need your help! Click the button below to make a difference!

Fires have been burning in California’s Sonoma, Napa, and Mendocino counties for over a week, as firefighters work tirelessly to contain the blaze. 17 wildfires have consumed well over 220,000 acres, left over 20,000 people under mandatory evacuation, claimed the lives of at least 40 people, and consumed at least 3,000 homes and businesses in a matter of days.
With firefighters still struggling to contain the fires, people, pets, farm animals and wildlife all remain at risk. GreaterGood.org is providing support to partners who are providing response, shelter and relief to those affected.
The recovery for many will be a long road, and the time to support them is now. Cash donations are needed to continue operating shelter and rescue operations. Please Help!
Make a difference