2020 is just not going to cut us a break it seems. First it was the pandemic, and then it was a consecutive invasion of non-native species that can wreak havoc on our different ecosystems – and the invasion is not over.

Now, there is a 4-foot-long black lizard with a white speckled pattern across its back that has made its way to Georgia. The lizard is known as an Argentine tegu. And like other non-native species, it holds the potential to be a destructive force on the native wildlife in Georgia.

Reported by Travel + Leisure, the scaled lizard is originally from South America, but then made its way to South Florida, and was eventually spotted in Georgia. They’re known to eat the eggs of several different species of animals, such as ground-nesting birds like quail and turkeys, reptiles such as alligators and gopher tortoises, and have even chicken eggs. The lizards are not fussy eaters in the least since they will happily eat pet food, fruit, vegetables, carrion, grasshoppers, small gopher tortoises, as well as small animals. Given these lizards’ voracious appetites, they can be quite a threat to the gopher tortoise – a protected species in Georgia. Not only to the tegus eat the tortoises, but they also take over their burrows, kicking out the tortoises in the meantime.

The state of Georgia is quite concerned, given the potential that the lizard species has to completely decimate the tortoise population. That is why the Georgia Department of Natural Resources is urging the public to report all tegu sightings – either alive or dead – in order for the department to be able to track the lizard’s population and contain it. Since the lizards have no natural predators in Georgia, the tegu female is able to lay around 35 eggs every year – that’s a lot of tegu lizards! 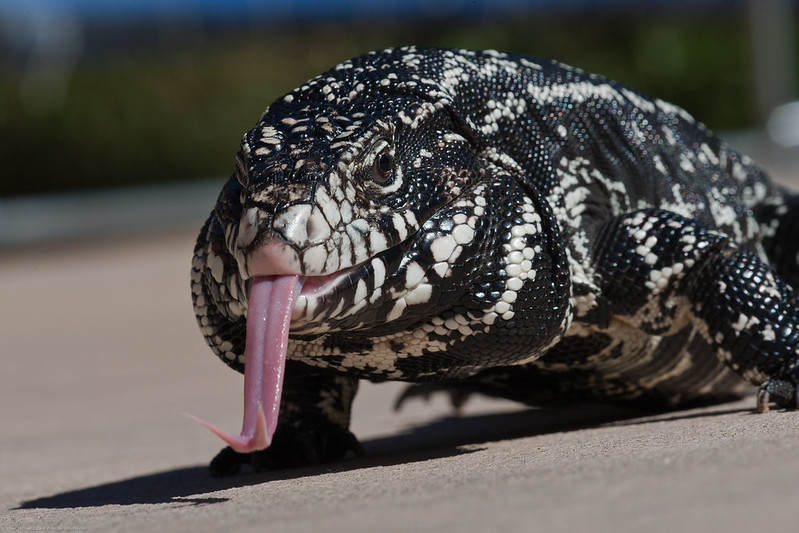 So far, the tegus have been spotted within the Toombs and Tattnall counties. They can range in size from 6 inches when young, to 4 feet long. The hatchlings look quite distinct by having bright green heads. While these lizards don’t necessarily attack humans, they do have sharp claws and teeth, which they will happily use if they feel threatened. Therefore, you shouldn’t get too close to them.

The department’s submission policy is to then attach the image to a form where you fill in some important details about the lizard’s size and location, then submit. After that, the Georgia Invasive Species Task Force will be on the case.