Dogs and cats have been involved in a very long war, but some have chosen to put their differences aside and be friends. A stray tuxedo kitten and puppy were found huddling together on a soccer field in Virginia. Defying the odds by refusing to leave each other.

A local woman, Angela Ward, saw a plea about the animals needing rescue. Her daughter Madison, along with her friend Kristin Schultz joined her at the soccer field to rescue the pair. 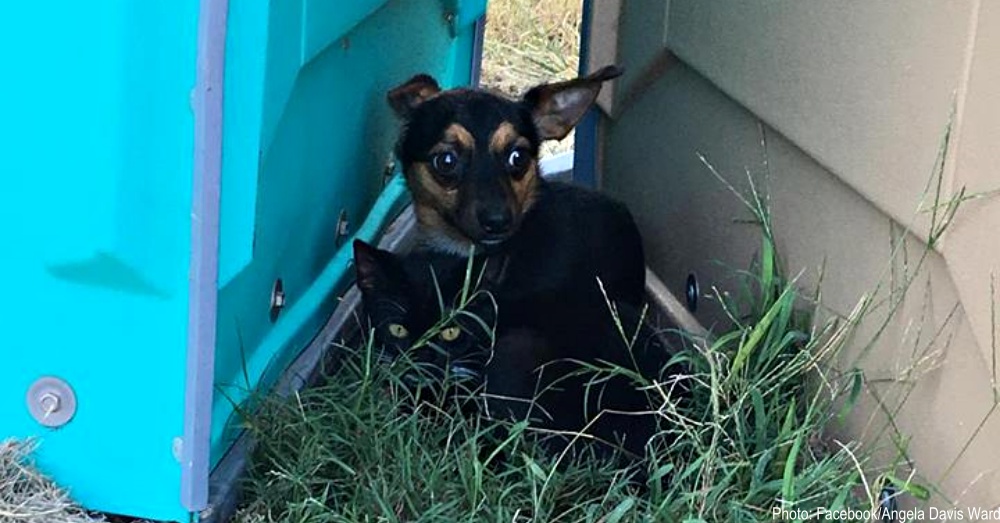 “We are all huge animal lovers and couldn’t stand to see them left there. We have a lot of coyotes in this area that come out at night,” Angela told Love Meow. “Sure enough, these two were still cowering between the porta-potties.”

When they tried to approach the dog would growl, while the kitten hid behind the pup. To ensure everyone’s safety, they called Animal Control for help. It was obvious the two were very bonded. Once help arrived, the pair was brought to an emergency vet to be examined.

“The dog was very sweet, just scared. The cat did have something wrong with her fur so the officer was taking both to the Emergency Vet.”

When no one came forward to claim them, they headed to a local shelter. However, it was highly unlikely that they would be adopted together. Bonded pairs are much harder to adopt than a single animal. Thankfully, a local rescue in Virginia Beach, Saver of Souls Pet Rescue, heard about the bonded duo and stepped up to take them.

“Our rescue stepped up to the plate. We couldn’t bear to separate these sweet friends.”


The new shelter named the kitten, Morticia and the Chihuahua mix pup, Gomez. They are currently in a foster home enjoying naps in the same bed. Slowly, they are starting to trust humans and warm up to them. Once they are spayed and neutered they will be available for adoption as a pair.

It is unknown how the two best friends found each other, but they will never be separated. They rely on each other for support and comfort. If you are interested in adopting the adorable pair, you can click here.