Finding joy in life is always possible, regardless of the boundaries that may inhibit us physically.

For inspiration, look to Smiley the dog, a Golden Retriever who was born with no eyes and spent the first two years of his life in a puppy mill awaiting euthanization. Smiley was also born with a form of dwarfism and other physical issues, so it seemed that finding a family of his own was something he’d never get to experience. But then one day, a veterinarian named Joanne George came along and changed the course of the young dog’s life.


Joanne had been sent to the Canadian puppy mill to euthanize 20 of the 85 dogs who lived there. The conditions were so squalid that Joanne couldn’t bear to fulfill her mission, however. The smell was so horrific that Joanne and her team could barely enter the barn where the dogs were kept, and she resolved then and there to take action.

Joanne and another vet tech adopted all 20 of the dogs she’d been sent to put to sleep that day. She found homes for all but one, the blind pup that no one wanted.

Soon Smiley warmed up to his new life with his family in Stouffville, Ontario, Canada. He was the sweetest and most eager-to-please dog you’d ever hope to meet! Devoted to his family and happy to meet just about everyone he encountered, Joanne soon signed him up to be a therapy dog.

For years Smiley went to schools, hospitals, nursing homes — anywhere that people needed a boost of love and affection, not to mention a lesson in perseverance and strength.

Glad to meet Smiley, the Ontario therapy dog who teaches kids about bullying & acceptance. My thanks to St. John Ambulance for the visit. pic.twitter.com/1Xvl9QudM0

Smiley spread joy wherever he went until he was 15 years old, when he died peacefully after a brief fight with cancer.

Still, Smiley’s legacy lives on. In a recently resurfaced viral video, Smiley continues to light up the world with his amazing “can-do” attitude.

Joanne recorded this video of a geriatric Smiley coming outside for a walk. Fresh snow had just fallen, and although the dog is blind and nearly deaf with age, there’s something about the tang of cold in the air that makes him look, and act, like a puppy again.


In the description of the YouTube video, Joanne explains that even though Smiley was mostly deaf in his old age, he could still hear high-pitched sounds and voices. You can hear Joanne adjusting her own voice to be very high in the video, calling her dog to her and guiding him along the snowy path using only her voice.

Every time she speaks, Smiley abruptly changes course and follows the sound of his master’s voice. It’s just incredibly sweet to see, and honestly we think he’d have followed Joanne to the ends of the earth, if she’d asked him to. 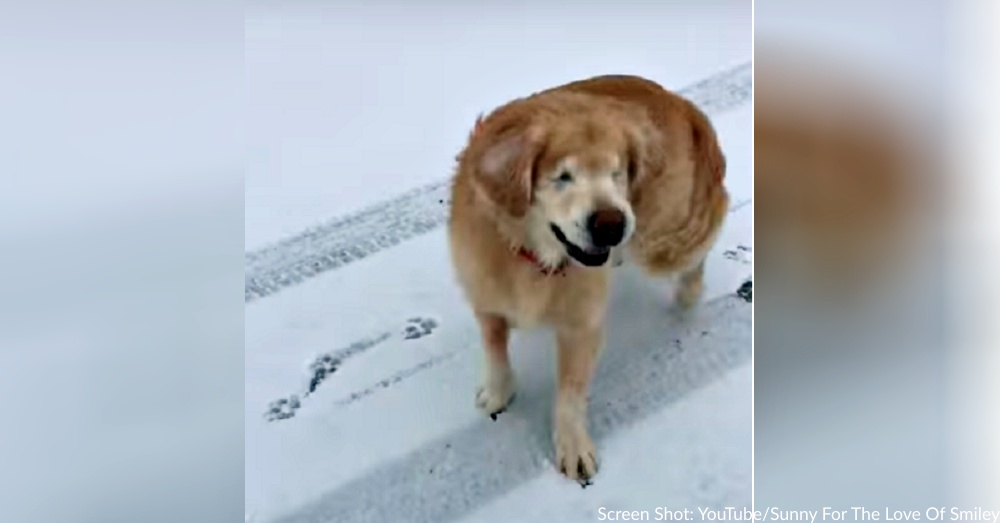 And through it all, he was smiling.

“He does something to people,” Joanne explained. “People say they feel like a different person after meeting Smiley.”

We could all use a little reminder that joy is always available, as long as we’re willing to look (and listen!) for it. We miss you, Smiley, but thank you for bringing happiness to us even after you’ve gone.

Watch Smiley in action in the video below, and be sure to share with an animal lover you know.