It is illegal to hunt a fox with a pack of hounds in England, Scotland and Wales, but the rules are rarely enforced.

West Kent Hunt Saboteurs, an animal protection group, knew these illegal hunts still occurred and wanted to do something to prove it. The group takes a non-violent approach to stopping the brutal killing of foxes by using horn calls, spraying citronella to cover scent, and sometimes put themselves between the frightened animal and the hounds.

The various groups located throughout England go out every Saturday during hunting season to help save wildlife. This year they decided to bring drones to record and capture the illegal hunts.

South Coast Hunt Sabs was monitoring a hunt and called in West Kent Hunt Sabs for help. They used a drone to see where the hounds were in the field and captured the large pack tracking a fox. They attempted to distract the hounds by using a horn call, but it did not work.


“We followed them going up and down ditches for 12 minutes with the huntsmen encouraging them on, terrier men lurking in the background and unfortunately they found what they’d been searching for…. a beautiful fox that was hiding in the gorse. They tore it to shreds beheading it in a process that lasted 3 minutes from start to finish. Neither the huntsmen or the terrier men made any attempt to intervene,” posted West Kent Hunt Sabs.

Harry Blackhurst, of West Kent Hunt Sabs, said, “We were speechless. How anyone can do that to an animal is beyond me.

“But nothing’s being done because the Hunting Act is weak, so they use any loopholes in the law.

“In the footage, the fox’s head is just to the right. We tried to get clearer footage of the body but the terrier-men of the hunt took it away.

“The most mortifying thing was when they killed the fox, they [the hunters] were all laughing.

“This was illegal hunting. There were at least 30 hounds – what you would call a full pack and they made absolutely no attempt to lay a trail.

“They were there for an hour and a half going round in circles to help the hounds pick up the scent of the fox.”

The disturbing footage was shared on the group’s Facebook page to show that the law needs to be strengthened and enforced. A photo taken of a hunter celebrating the kill was posted with the caption, “Fist pumping for the kill. A pathetic example of the human race.”

The Hunting Act, established in 2004, prohibits hunting foxes and wild mammals with dogs, but has many loopholes and is not enforced. This heartbreaking footage is compelling evidence against the hunters and is something that law enforcement cannot ignore.

Sussex Police are investigating the incident. People are disgusted by the gruesome act and hope that something will finally be done to end fox hunting for good.

Action Against Foxhunting commented, “Unimaginable cruelty. I hope your footage is the one that brings not just this hunt down, but all of the rest too.”

Watch the drone footage below and don’t forget to sign the petition to end this blood sport.

End Hound Hunts In The UK — For Good! 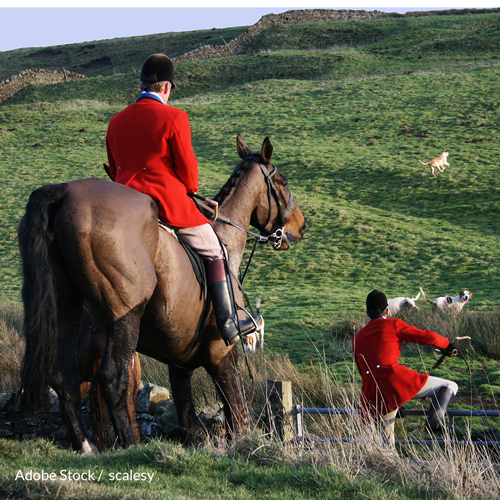 Animal torture is neither sport nor entertainment. Despite the ban of fox hunting in 2004, it continues to persist, as hunters have found ways to circumvent the law. Both the hunters and hounds are raising havoc and fear when they take part in these hunts, and they’re leaving destruction in their wake. Vegetation and wildlife are often ravaged after these hunts occur.
Tell the Minister of the Department for Environment, Food, & Rural Affairs to ban hound hunts in the U.K. and to close all loopholes to the law. The hunts are reckless and dangerous for both animals and local residents. The brutal killing of an animal is not entertainment or sport!
Make a difference!